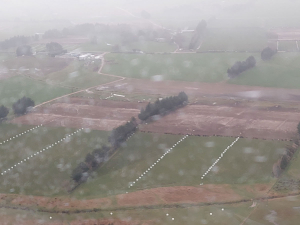 A recent surveillance flight showed farmers are well-prepared for the season.

The flight focused on the Mataura and upper Oreti catchments, with only three landowners identified as having potential issues that required a closer look on-farm. “I’m really pleased with what the team has seen,” says Environment Southland chief executive Rob Phillips.

He says the surveillance flights help to reinforce the idea that what is seen from the road isn’t always reflective of on-farm rule breaches and environmental damage.

“Farmers are working hard and understanding the situation and making a real effort to improve things,” he says. “This sustained improvement is something that Southland, as a whole, can be proud of.”

One area noted from the flight that could be improved was the grazing of buffers. Phillips says the team noticed that while good buffers were in place, some had been grazed.

“Its important buffers are left ungrazed to remain an effective tool for reducing sediment getting to waterways.”

He says while wet weather is inevitable and presents several challenges, it is critical for farmers to continue to focus on good wintering practice and not become complacent.

Phillips says agriculture in Southland is very important to the regional and national economies, but some farming practices – if done incorrectly or not done well – negatively impact water quality.

“Winter grazing is recognised as a high risk activity with regard to water quality and a lot of effort has gone into providing advice and information to help farmers understand what is expected of them.”

Acting compliance manager for Environment Southland, Glen McMurdo, told Dairy News that, when flying, the team is looking for good farm practices in terms of intensive winter grazing, as listed in their rules.

“We also check for discharges or likely discharges to land or water, and any other instances where regional rules or NES regulations may be breached.”

Rabobank has donated tunnel houses to eight primary schools from across the Southland region as part of an initiative to help educate about growing food, sustainability and reducing waste.

No rain, but a perfect storm

Southland farmers are reeling from the combined impacts of Covid-19 and a long dry period, say the local Rural Support Trust.

Looking back on his tenure as chief executive of Environment Southland (ES), Rob Phillips says education has played a ‘real part’ in the relationship between council and farmers.