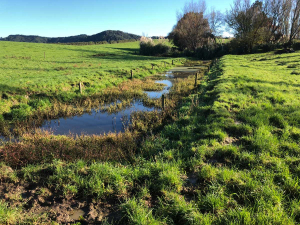 A Waikato farmer has been fined $57,375 for the unlawful discharge of effluent to a local stream from a storage pond.

Terry Hazlehurst, of Morrinsville, pleaded guilty in the Hamilton District Court on February 4.

On 8 June 2018, Waikato Regional Council carried out a proactive inspection at Hazlehurst’s farm and found a pipe from an effluent storage pond was actively discharging effluent into a waterway that leads to Tauhei Stream.

An investigation by the council discovered that the discharge had been occurring intermittently for the previous 43 months.

At sentencing, Judge Melinda Dickey expressed “serious concern” over the length of time over which the discharge occurred.

Dickey described the offending as “deliberate” and demonstrating a “disregard for the effects of the effluent discharge on the environment”.

An enforcement order was also issued aimed at immediate improvements to the effluent ponds.

“This kind of behaviour needs to change. Obviously it has a detrimental effect on the environment, but it also undermines all of the good work being done by the farming industry and wider community to improve water quality.”