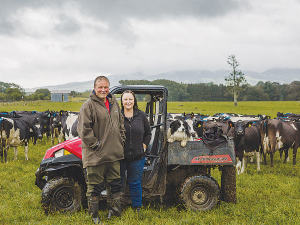 Udders blowing out and poor suspensory ligaments are increasingly a concern for many dairy farmers who need their return on genetic investment to be evident in cows which last in the herd.

The issues are likely to be topics of discussion at Fieldays 2021, says Craig Robertson, World Wide Sires NZ’s sales and marketing manager.

“We’re increasingly getting farmers coming to us concerned that their NZ bred cows aren’t seeing more than one or two lactations due to poor udder conformation,” Robertson said.

Waikato dairy farmers Reg and Hayley Davey are cases in point, purchasing their original herd around 22 years ago.

Reg recalls it was a good NZ genetics herd, “but after milking them for a season or so, we had some concerns about their udder conformation. Udders were blowing out, and quite a few cows had poor suspensory ligaments which became evident when they got a bit of age. These issues impacted on the time they spent in the herd. We expect cows to last 10 seasons but found they were culling cows “which should have been in their prime, because their udders simply weren’t holding up.”

This, and concerns about lack of service, saw them dabble and then move to overseas genetics.

“BW doesn’t worry us – we are after production from placid, well conformed, moderately sized animals which will last in the herd,” Reg Davey said.

“We’re milking 360 predominantly Holstein Friesian cows on 117 hectares under system 4 or 5 depending on the season. We feed grass silage, maize, PKE and turnips in summer. Current production averages 460 kgMS per cow but our goal is 500 kgMS per cow.”

Robertson said World Wide Sires is working with the Daveys to provide genetics which will correct the udder conformation problems in the herd.

“I’m confident the improvement they’re seeing will continue and enable them to achieve, and surpass, their production target. Understanding and helping them overcome the challenges farmers are facing is one of the greatest satisfactions for the World Wide Sires’ team.

“I’d like to extend an invitation to any farmers out there who aren’t satisfied with the genetics or service they’re currently getting, to come and talk with us at the Fieldays 2021,” Robertson said.

Agriculture brings with it several challenges and a level of uncertainty, so premium support for tractors and machinery is never far from a farmer’s mind.

Asset management, remote worker safety, and Electronic Road User Charges are all fleet and location-based technologies that improve operations in the agricultural industry.