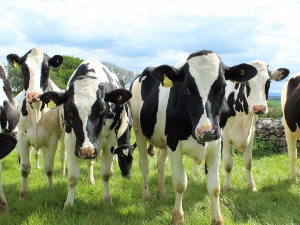 It takes up to two weeks for most heifers to establish a quiet response to milking.

There are several options for reducing heifer mastitis, such as treating with an internal teat sealant, applying teat spray before calving, or milking heifers within 12 hours of calving.

It takes up to two weeks for most heifers to establish a quiet response to milking. It is important to be patient and gentle during this period to maximise production, minimise milking times, and reduce the risk of injury. Taking care when adjusting first-calvers to the milking routine will also reduce the risk of mastitis.

After calving, heifers are often uncomfortable with swollen udders, or oedema, and may be more difficult to move, handle and milk out completely.

For young cows calving for the first time, the milking routine is a new and different experience.

It takes about two weeks for most heifers to establish a quiet, reliable response to milking. Milking staff must be patient and as gentle as possible during this period.

This is important to maximise production, minimise milking times and reduce risk of injury to milkers and animals.

Extra labour may be required at calving time.

Some practical and highly effective ways to prevent mastitis in  heifers include using internal teat sealant approximately four weeks before the planned start of calving.

Also, pick up calves twice daily and milking animals within 9-12 hours after calving.

The choice of strategy for an individual herd will depend on gap in performance between incidence of clinical mastitis and industry targets.

It will also depend on costs, potential risks and likely benefits of each approach.

Herds experiencing more than 16 cases of clinical mastitis per 100 heifers within the first two weeks of lactation (or eight cases per 50 heifer calvings) should consider ways to reduce heifer mastitis more proactively.

DairyNZ recommends you discuss options and potential costs with your veterinarian. Use of antibiotics in heifers at calving time is not recommended due to high costs and the risk of antibiotic residues in milk.

It takes about two weeks for heifers to familiarise themselves with the surroundings of the milking area, entry and exit routes, and to establish a quiet, reliable routine.

To maximise production and minimise risk of injury to milkers and animals, milking staff must as patient and gentle as possible during this period.

The first two weeks of milking can be made a lot easier if heifers are trained prior to calving, starting with just walking to the dairy yard and holding them for a short period, building up to turning on machines and walking them through the dairy.

Take this opportunity to teat spray. Use of an internal teat sealant in heifers can also provide an opportunity to familiarise heifers with the dairy and yards four to six weeks before calving.