Spot cycling cows in a flash and improve in-calf rates 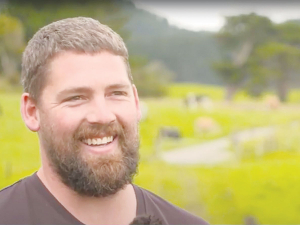 When Shaun Gardner did his homework on full autumn calving last season, he realised he'd need every heat detection advantage.

"With autumn calving, cows are likely to cycle, or are harder to pick up on heats," says Shaun.

Shaun says he asked around and FlashMate was consistently the answer.

The top autumn-calving herd in New Zealand for reproduction statistics is Dan and Abbie Hinton at Eureka, Wakato, who have been using FlashMate for six seasons.

Shaun and Michelle Gardner run 120 cows on their Waiiti dairy farm in Taranaki.

"After two weeks using them, I felt very comfortable that the right cows were going up for AB," Shaun said. Now, even his four-year-old daughter can spot cows on heat.

Then came the added advantage of detecting silent heats, quickly covering the investment right there and then.

"With FlashMate we picked up cows that we wouldn't have seen, with slightly lower heats and less rubbing," said Gardner.

Because it is touch-sensitive, when cows are quietly cycling, they still receive attention from other cows, which sets FlashMate off.

Overseas studies show silent heats can range 10 to 20% of herds. The wider product experience got the thumbs-up from Shaun.

"I had none come off the cows in the first six weeks. I was very, very happy with that!" FlashMate sticks firmly to cow hair, which stays with the cow a lot more during winter.

Shaun believes FlashMate takes away decisionmaking stress. He doesn't have to worry if he goes away for a weekend, that staff can see a flashing light and pull them out with no hesitation.

Visit FlashMate at the National Fieldays at site PC4.

Agriculture brings with it several challenges and a level of uncertainty, so premium support for tractors and machinery is never far from a farmer’s mind.

Asset management, remote worker safety, and Electronic Road User Charges are all fleet and location-based technologies that improve operations in the agricultural industry.