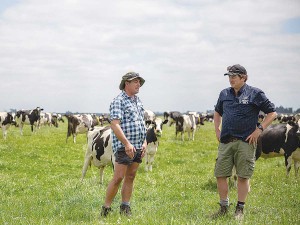 "When we bought the cows they were a mix of European and North American genetics. In deciding our future breeding strategy we considered two options - to go completely non index, high input/high production or, as most sharemilkers do, breed for index as your cows are your only asset," Hayden said.

"There are pros and cons for both approaches but we decided to go down the route of North American high input/high output."

Hayden had experience of North American genetics having grown up on his parents' farm with milked an all-American Jersey herd.

"The 400 hectare farm is 100% self-contained; we graze all cows, young stock and heifers and grow the majority of supplements - maize, silage, lucerne, barley and peas. We're 80% pasture - grass is the basis of the diet - even though we are feeding up to two tonnes of supplement.

"We operate a closed herd with no animals grazed out or bought in - and were doing that before M. bovis became an issue for the industry. The devastation that disease caused so many farmers convinced us we'd done the right thing in being a closed herd.

"We milk 850 Holstein Friesian/Jersey cows split calving in autumn and spring and which produce, on average, between 570 and 620kgMS/cow.

"We are 100% AI. We haven't used bulls for six or seven years. We AI twice a day for ten weeks straight in spring and five weeks in autumn. Last year we put collars on the cows and that's made AI a lot easier. The collars have helped identify silent or short heats which can be common amongst high producing Holstein Friesians.

"We produce according to the incentives provided by the industry so at this point (mid 2020-2021 season) we are looking to increase spring calving and reduce autumn calving, simply because of payout.

"At the end of the day production comes down to what you feed the cows - you can get any cow to produce 700 kgMS but a lot, particularly New Zealand genetics, won't last for many lactations. We need high producing cows which last, and we are getting that. Their udders don't drop off after two lactations.

"We participate in WWS' Mate programme which enables you to select a team of bulls which offset any weakenesses and maximise the strengths of the herd.

"It takes the guess-work out of it and we see the benefits at every calving and as heifers come into the herd. We generally select around five to six bulls - 60% genomic and 40% proven.

"We are after high producing good commercial cows which last. Our ideal cow is around 600kg good temperament, strong with capacity, fertile and high producing."

One size does not fit all

It all comes down to good bulls

Good bull management means running adequte numbers of bulls with the herd, reducing their stress, and handling bulls to minimise the risk of injury to people and animals.