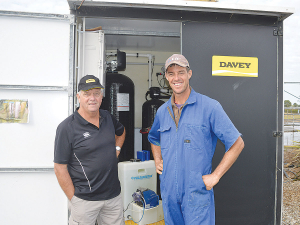 The results showed water sourced from three boreholes on the 76ha farm had unacceptable levels of minerals, nitrates and even E coli.

Van Ras had already installed a slow sand filter to produce high-quality water for stock and an ultraviolet water (UV) purification system for household water on the farm; the sand filter wasn’t 100% foolproof and the UV system wasn’t powerful enough to service the whole farm.

Van Ras, who milks 215 cows and supplies Tatua, says he was on the lookout for a water filtration system to cover the whole farm. A neighbour recommended Davey Water Products.

In June 2017, Davey technicians arrived on the farm; water samples were taken over the next month and analysed.

“We were a test site for a month; they were taking samples away almost daily for lab tests,” he says. “They didn’t stop until they got it right.”

For the Van Ras farm, Davey designed a three-stage filtration system in which a cylinder filled with metal is squirted with cholrine which mixes with water arriving by pipe connected to the boreholes.

The water then passes through a cylinder which takes out iron, through another cylinder that removes magnesium and finally through a third cylinder mixed with pool salt to soften the water.

Richard Van Ras says each farm will require a different system, depending on the quality of aquifers from where water is sourced.

His message to farmers is to identify and correct water quality problems.

“If you have any doubt about the quality of water you intend to use for irrigation or stock get it tested by an accredited laboratory; it pays to have your water tested before and sometimes during use.”

Richard says water is still tested on the farm regularly and is found to be less polluted than drinking water available in most regions.

“Only after you have put this system in do you realise the difference.”

The Van Ras put magnesium and zinc in water troughs for stock. Now these minerals don’t compete with unnecessary minerals and bacteria and do their job more effectively.

Water in troughs is now “crystal clear” and even the cows recognise this, Van Ras says.

“When the thirsty cows turn up at the troughs, if the water isn’t nice they will sniff and lick and then hang around; eventually they will come back and drink.

“The water is crystal clear so they come, have a drink and then off they go; there’s no congregating around the troughs. That’s a big difference we have noticed.”

Richard says a confidentiality agreement signed with Davey during the trial prevents them disclosing the cost of the system.

He spends about $1500 a year on pool salt and chlorine.

The Van Ras have bought a Halo system which is also linked to water filtration system.

While on a family holiday in Netherlands last year, Van Ras was able to monitor salt and chlorine levels and water usage on the farm.

“Water metering is coming and regional councils want to know how much water we use on our farms; we have that covered on our farm.”

Dwindling water levels a cause for concern

Water is the central and sole focus of this year’s dry so far, says Julie Jonker of Northland Rural Support Trust.