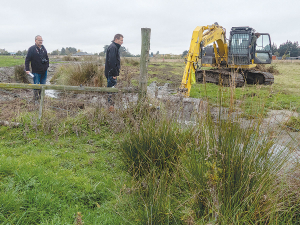 New environmental management rules for the Canterbury Regional Council’s Waimakariri Zone will be tough for farmers, says the chairman of the Waimakariri zone committee, Dave Ashby.

The committee presented its zone implementation programme addendum (ZIPA), to ECan in December. It includes 93 water management recommendations which will be reflected in the sub-regional change to the Canterbury Land and Water Regional Plan, now being developed to go out for formal public consultation in late June.

Ashby calls it “probably one of the clearest and toughest of any ZIPA produced by any of the zone committees”.

“It is focussed on the environment, biodiversity and cultural aspirations, with little wriggle room for more intensive agricultural development within the zone.”

Ashby, a dairy farmer in the zone and an environmental consultant certified to audit Farm Environment Plans, said the committee’s role is to develop recommendations which reflect the views of the community.

“It’s very tough for farmers but it recognises what the community wants and it’s not the end of the world.”

The zone covers a swath of Canterbury north from the Waimakariri River including the Ashley and other rivers and the towns of Rangiora, Kaiapoi and Oxford.

Ashby said the zone differs from others because of the large amount of heavy soil at the eastern end with a lot of freshwater springs and creeks, plus saltwater estuaries. Its sizeable urban and peri-urban populations add to water quality issues.

It recommends that all farmers in the zone reach baseline good management practice (GMP) by 2025.

Within the nitrate priority area it calls for a further 15% nitrate reduction by dairy farms and 5% by others by 2030.

Meanwhile, Ashby said several initiatives are underway including biodiversity projects, a three-year infiltration trial on the Silverstream (a possible precursor to a managed aquifer recharge scheme) and a trial sedimentation trap on the Cam River.

“Our ZIPA talks are hot on ongoing monitoring and measuring -- getting a whole lot of data about where things are going.

“There’s been a lot of modelling but we need to know what is actually happening with nitrates, phosphates and EColi.”

In managing the environment, farmers must ‘walk the walk in order to talk the talk’.

That includes taking part in the Easterbrook community planting scheme aimed at transforming a 1.8km stretch of the Easterbrook stream. This rises from a spring on his farm and forms part of his boundary.

The heavily sedimented stream is being dug out and bunded and will be fenced off to prevent stock access. The banks will be planted in natives in late winter or spring.