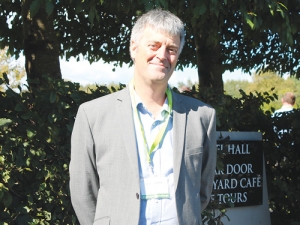 Fonterra's share would be small, however current research on the health benefits of a particular strain for conditions such as allergies may see it get a larger slice.

"There's quite a lot of money to be made in bugs," he told an Auckland conference.

Dekker explained to Dairy News that Fonterra has the HN019 strain, trademarked DR10, which is used in the yoghurt product Symbio in the New Zealand market. It is starting to be used overseas in the Anmum range's maternal product, infant formula and growing up milks.

The other commercialised strain, HN001, trademarked DR20, is not much used yet as they are trying to work out how to pitch it. Trials show it has allergy benefits but it is difficult to tell consumers because it is hard to make those sort of health claims, he says.

With DR10 you can say it supports a healthy gut. "But with DR20 we are struggling; we've got this benefit but how do we promote this? Allergy is common, a lot of people know about it but it's still not enough for a global brand. So we're looking at what will be the benefits attached to DR20 in the mother-infant space.

"We have work coming out soon which hopefully will answer that."

Another question on DR20 is about dose. Current studies are at dietary supplement level, and in yoghurt or cheese you can also get enough probiotic in one go.

"But a milk powder on a shelf for two years [suffers] a little bit of die-off," he says.

"You have to put in extra at the start to make sure there's an effective dose at the end of shelf life. So that extra you have to put into milk powder means it is not quite cost-effective. We are working to reduce the dose or improve the stability to get us into the sweet spot.

"That will make it cost-effective for a powder; it is all work in progress."

They have Asian markets in mind but are also keen to launch in NZ especially with eczema being prevalent here in infants. He has heard that 20% of infants in NZ get eczema at some point.

"It is quite common in NZ and there's not much you can do for it once it has happened apart from treating the symptoms, putting creams on, etc, so it is upsetting for the child. If we can prevent that, great. That gets back to us saying 'how do you talk about the benefit without contravening the rules on what you can say about infant formula?' We are still working on that."

Earlier Dekker told a High Value Nutrition symposium in Auckland that a trial with HN001 (DR20) showed that infants at risk of eczema given the probiotic in the first two years of life – with the mother also given it in the last two weeks of pregnancy -- had a 50% reduction in the condition versus those given a placebo.

"That's a fantastic result – there isn't any treatment out there, including pharmaceutical, which will offer that kind of benefit."

The effect was maintained when the children reached four and six despite receiving no further probiotic. (An earlier speaker told the conference that while most infants grow out of eczema some go on to develop food allergies and asthma).

"The problem is how to translate that into health claims. It is difficult to talk about therapeutic claims – and any kind of claim in infant formula," Dekker says.

Interestingly HN019 (DR10) had no effect whatsoever, he says. It is a great probiotic in many respects but for this outcome it didn't show much benefit at all.

However with DR10 a large study of two groups of children fed fortified milk – one containing a probiotic and a prebiotic and the other a placebo -- over two years showed there was a "whole bunch" of benefits.

In addition, two studies about to be published will show respiratory tract infection protection in infant populations in different countries.