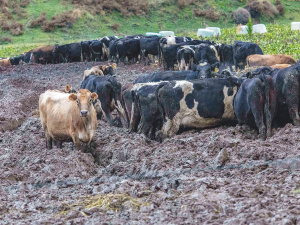 A Fish and Game-released photo of cows in deep mud.

It looks like the next attack on farming will take the form of a campaign against winter grazing and the negative impact this can have on livestock and water quality.

Done correctly, winter grazing is an effective way to keep animals fed and healthy over winter in a pastoral farming system when grass growth is low or non-existent.

However, farmers in Southland, Otago and Canterbury are bracing for a major animal rights campaign against winter grazing practices, after reports that fixed wing aircraft, helicopters and even drones were used to film stock in mud.

It’s likely that a highly emotive crusade, using these pictures and targeting urban audiences, will be used to throw mud – literally and figuratively – at the farming sector. It will insinuate that the industry does not care about the animals it farms or the land they are on. Watch this space!

Lobby groups Fish & Game and Forest & Bird have denied any link to the campaign, but you can bet they’ll be in boots and all to criticise farmers when it does finally go public.

Despite this being another cheap shot at farming, the industry can only blame itself for allowing it to gather momentum. As during the previous alarms about water quality and animal welfare, the trumpets will be blaring about the public’s lack of tolerance of cattle up to their knees in mud during winter.

Such practices, albeit only by a minority of farmers, are bad for the animals, bad for the land, bad for water quality with the resulting sediment run-off and a very bad look for farming.

As Beef + Lamb New Zealand’s chairman Andrew Morrison rightly says: “Poor winter grazing practices are unacceptable as they are destructive to soils and waterways and can lead to poor animal welfare outcomes.”

Farmers clearly now must have a social licence to operate and this includes correct animal welfare and environmental standards as expected by the public and consumers. Farmers who disregard these standards, such as poor winter grazers, need to be weeded from the sector like other poor performers

Meanwhile, the anti-farming activists must realise that constantly bashing farmers is not the way to get them to do more in sustainability and compliance. ANZ’s Mark Hiddleston believes this is only deterring talented people from entering the industry and farmers from investing in making changes to meet the new sustainability requirements.

How to body condition score