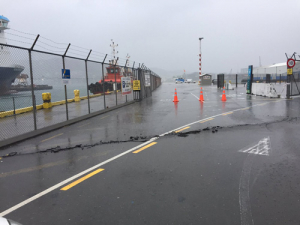 Heaven forbid what would have happened to people working in buildings at the Wellington Port.

One senses that there is an attempt to talk down the seriousness of the problem by some people in authority and their fancy PR company. Like saying the floor didn’t pancake, just part of it caved in. Really!!! How sensitive and reassuring is that so only 20 instead of 50 people would have been killed. They appear to be making light of the situation. What they are also not saying is that desks and other items of furniture would have flown around the offices like bullets. This has the appearance of an organisation in real trouble and scared of the truth.

The fact is the port is headed for some tough times and so are ratepayers. Over the years the port has struggled and now relies heavily on revenue from the Cook Strait ferries, the export of logs and a few others ships that call there. It’s a shadow of what it was 40 years ago.

Centreport is owned by the Greater Wellington Regional Council and Horizons Regional Council who inherited the port when local government was reorganised in 1989. The port is sort of arms length from the councils but each year some of their profits are returned by way of dividends to the councils to supplement rates. A sort of cash cow. Well the old cow has probably dried off for this season and next and so forget the supplement for a while folks.

For a start there will be no revenue from some of those buildings for some time – in the case of the Statistics NZ building possibly never! One imagines the buildings were put there to generate revenue but nature has destroyed that strategy.

Added to that the Centreport has offered up no real information about the damage to the port itself. But containers stacked up and looking like they will topple over at any moment, and huge cracks on the ground don’t look good.

So for ratepayers and that’s farmers too, expect either a rates hike or a cut in services when the new annual plans come out in the new year. That’s when there will be no place for the Port and councils to hide.

Two years on from the devastating November 2016 Kaikoura earthquake, Kaikoura dairy farmer Graham Collins says he is getting used to “the new normal”.

A New Zealand Winegrowers’ research project, funded by MPI, is hoping to take the lessons from the 7.8 Kaikoura earthquake to build a more resilient industry for the future.