Here’s why rural NZ is revolting

Written by  Andy Scott, chair of 50 Shades of Green 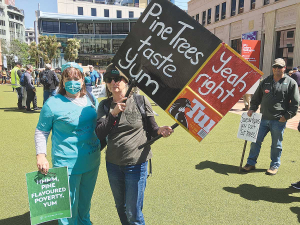 Andy Scott, chair of 50 Shades of Green explains why many farmers are concerned with new government policies.

On Thursday November 14, 50 Shades of Green NZ marched on Parliament.

We met at the Civic Centre where we were greeted by Robin Potangaroa, the chair of Ngati Kahungunu and Aowahanga Trust.

Robin spoke well, was concerned at what is happening in the rural sector and welcomed us with a karakia – which was also well received.

We also heard from farmer Mike Butterick and Eve McCallum (18), a graduate of Otago University. Eve spoke well and was mindful of the impacts on NZ of some of the adverse policies being put in place.

At about midday the marchers made their way to Parliament via Lambton Quay. We met many Wellingtonians, shook hands and had many claps along the way. In all this was a peaceful march designed to tell our message to NZ and this went well, even the NZ Police congratulating us on the rally.

At Parliament, Kerry Worsnop, of Wairoa, handed the 17,500 petition to Todd Muller and spoke to the crowd.

Sully Alsop then followed with a compelling speech, pointing out that for every minute of one day the agriculture sector provides $100,000 to the NZ economy. This equals the average income of two people, be they teachers, nurses or other public sector employees (but maybe only one third of a politician’s income).

Todd Muller replied with the usual message of support, but he was really preaching to the sceptics on this one. Then it was the turn of Damien O’Connor, who claimed that there is no blanket planting of farmland because it is prohibited by the OIO.

The Minister of Agriculture’s came only two weeks after the news that Pan Pac (a Japanese Company) had been approved – without having to go through the OIO -- to buy up to 20,000ha of farmland for conversion to forestry. Maybe that is what O’Connor meant by the OIO not approving blanket conversion, as they have side stepped that process.

Then it was the turn of Hon Shane Jones, who had nothing to say so opted instead to sing a waiata then promptly left the stage and was surrounded by media.

In all, I believe the march was a very big success, with three independent counts of the numbers estimating the crowd at 1200.

The message to Parliament was that they need to listen to the provinces, to the people and the science before adopting these drastic, one-way, economically suicidal policies. I believe Wellington listened and many NZers listened, but I am not convinced the politicians are listening.

Where to from here with 50 Shades of Green? Well, our mandate is to inform the public of these ludicrous policy decisions and we intend to hold the politicians to account.

We will be bringing to the front the consequences of the policies and the cost to NZ as a whole.

We will continue to remind people that the ETS scheme in its current form will cost each New Zealander $170 per week for the next 30 years.

And we will bring news, eg NZ exports logs to China, most of which are made into concrete boxing then afterwards are burnt. How can that help address global warming?

• Andy Scott is the chair of 50 Shades of Green

No threat to farming from forestry

OPINION: There’s some agitation out there at the moment about farming being under threat from forestry. Much of what’s circulating is based on misinformation so it’s time to lay out the facts.