Revamped Ranger a truck not a tractor 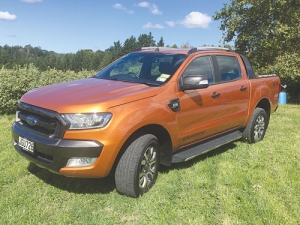 Looking out the front window of the Ford Ranger Wildtrak as you cruise along it's easy to forget you're driving a ute, not a luxury SUV.

The leather interior, the wealth of technology like adaptive cruise, the quiet cabin, the smooth ride; you could be in the Ranger's Prado-rivalling stablemate the Everest – until you hit a big bump and the cart-sprung solid rear axle bucks to remind you it's a truck under you, not a Remuera tractor.

The Wildtrak is the blingy range-topper, so the level of kit is not typical of the working-clothes Ranger variants (and there probably will be a few of these Flash Harries in Remmers).

However, it's the same truck underneath the toys and technology, with the same torquey 3.2L diesel and 6-speed automatic, the same capable chassis, and the same 4WD system, so it'll give us a good read on how much the recent refresh has improved the country's best-selling ute.

Ford released this refreshed Ranger just before the new Toyota Hilux hit the market. So far, Ford has held the sales advantage it gained over the old model Hilux.

Ford has polished refinement levels, making NVH (noise, vibration and harshness) suppression much better. New hydraulic drive train mounts have reduced vibrations from the engine. The truck is very quiet, although pin the throttle and the 5-cylinder gets rowdy enough to break through the serenity. It's a torquey unit though and does its best work below 3000rpm.

The output of the 3.2L engine remains the same – 147kW of power and 470Nm of torque -- but it has been fettled to improve fuel economy (9.0L/100km), although emissions have not changed. The automatic's shift schedule has also been retuned and a new torque converter added to improve power delivery.

A 2.2L diesel is still available on lower grade models.

The ride quality is good; it was good before, as was the handling. Actually, by normal car standards the ride and handling are good; by ute standards they're exceptional. A suspension retune has made the ride a bit smoother.

And Ford has given the Ranger electric steering, which is lighter at slow speeds than the old hydraulic system, firming up as speed increases and giving an accurate steer and good feel – not always a strength of electric steering. It also contributes to better fuel economy.

The capacity and capability stats are also as before: 1175kg payload, 3500kg towing, 1549mm tray length in double cab format, 1139mm tray width (between the wheel arches) and 800mm wading depth for the intrepid.

We didn't venture off road but the Ranger's credentials in the dirt are well established.

And the Ranger now has a very American looking face with a bold grille to enhance its overall tough stance. It's easy to see why it has been so popular.

With the new Hilux nipping at its heels, the revamp has come just in time.