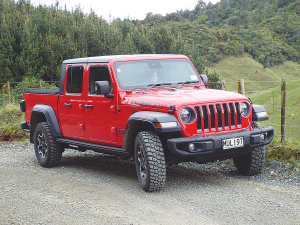 The new Jeep Gladiator is a truck – not a ute!

Firstly, I feel I must declare a little bias here.

If a truck is painted the same colour as a Welsh rugby jersey it’s going to have to be good. Let’s also confirm that the new Jeep Gladiator is a truck, not a ute.

First impressions – it’s big! Not RAM 2500 big. However, at 5.6 metres long, it’s 300mm longer than a Ford Ranger. Its 3090mm wheelbase is also 300mm longer than that of a Hilux. This latter point has the effect of putting the load tray behind the centre line of the rear axle, which in turns promotes better weight distribution and a less choppy ride.

Based around the Jeep Wrangler JL, but with a 787mm longer frame and a 492mm longer wheelbase, the Rubicon-spec machine we lived with for a week certainly grew on you. Jumping up into the cabin could be a stretch for the vertically-challenged, but so is getting on a large horse.

Once in, the saddle leather clad seats offered great support and, like the steering wheel, are heated – an unexpected bonus on a winter morning. Adjustment was ample and combined with tilt and telescopic steering wheel a good driving position could be found. The only real criticism was a small place to rest the left foot, restricted by a transmission tunnel “bump” in the foot well, and made worse if you wear work boots.

Motive power is taken care of by the V6 – a naturally aspirated and thirsty 3.6-litre Pentastar engine. This pushes out 209kW power and 346Nm torque, and in turn is mated to a ZF-sourced 8-speed automatic transmission. It is responsive, delightfully smooth and best left to its own devices. Two versions are available, the well specified Overland and the upgraded Rubicon that was our red steed. Overland gets Jeep’s Selec-Trac Active On-Demand 4x4 system, 18-inch alloys, keyless entry and a removable hard top roof. Add in a bunch of safety features like LED daytime running lights, full speed forward collision warning, adaptive cruise control and stop, blind spot monitor and rear cross path detection and the Gladiator is right up there. Options include a roll-up tonneau cover, spray-in bed liners and a host of outdoor activity fittings.

With tough stuff in mind, 2-inch Fox dampers are fitted fore and aft, while a forward-facing trail camera gives a view of the terrain ahead.

During our week with the Gladiator, its size is quickly forgotten – although not in the case of the domestic manager, who refused to climb up into the cab. We enjoyed the relaxed driving style, the surprisingly comfortable drive and, of course, the admiring glances – no doubt brought on by the Welsh Dragon Red paint job.

But remember where we started – this isn’t a ute. So, if you want to “attack” the outdoors, maybe with the roof and doors off, or drive something different with looks as rugged as John Wayne, Gladiator might be the choice for you – in red, of course!

Jeep Gladiator a chariot that will attract many

2020 will see the arrival of a Jeep aimed at tapping Kiwis’ unquenchable thirst for utes, says brand distributor in New Zealand, Ateco.

The Jeep legend was born in WWII but it came of age in the 1970s with a Golden Eagle version of the Jeep CJ7.

Drive this over the Jones

You'll stand out if you're prepared to hand over the moolah for the Jeep Brute Sport. It won’t so much be a case of ‘keeping up with the Jones’, as driving over them.