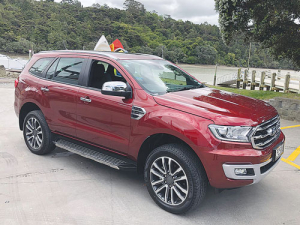 The revised Ford Everest Titanium may have replaced the 3.2L, five-cylinder single-turbo diesel with a 2.0L four-cylinder bi-turbo diesel but it still retains power and towing.

This efficient new drivetrain is the major update to the Everest, the rest being largely a visual refresh inside and out, changes to suspension tuning and some new active safety technology thrown in for good measure.

High-pressure fuel injection and low-friction design both feature in an engine that manages to get more from less: more power than the old 3.2L (157kW vs 143kW) and more torque (500Nm vs. 470Nm). Power delivery is similar to the old engine up to 3000rpm, at which point the 3.2L is done, but the 2.0L keeps making power up to 4000rpm. The small engine also makes max torque as low in the rev range as the 3.2L did. So it’s faster.

Towing capacity must be lower, surely? Not according to Ford: it says the new Everest can now tow an extra 100kg at 3100kg braked capacity.

The only real downside is the loss of tone: the old five-cylinder made a distinctive growl that the new engine can’t match. However, the new four-cylinder is more refined.

The new 10-speed can take some credit for the lower fuel consumption and for the better progress across country: with 10 ratios to choose from, the Everest was nearly always in the right gear for the road speed and conditions. Co-developed by Ford and General Motors, this transmission impressed with its smoothness and quick shifts.

Ford says it has fettled the damper tune, lowered spring rates and modified the front stabiliser bar to improve suspension performance. It’s hard to tell the difference behind the wheel, to be honest, but we’ve always found the Everest handled better than most SUVs with ute-based heritage. That remains the case and for such a high-rider it inspires confidence on the road, holding a line through corners and not bucking and wobbling like many in this category used to do.

Like its Ranger stablemate, the electric steering is also well weighted, nicely accurate and, while a bit numb, still rates at or near the top of a class once known for vague tiller feel, to say the least.

Last but not least, the active safety technology has radar and sensors for Africa and now includes adaptive cruise control that matches the speed of traffic in front, blind-spot monitoring, rear cross traffic alert and a lane keeping system. The driver aid we appreciated the most though was the foward alert with collision mitigation, which prevented a nasty rear-ender. At least we know it works in the real world.