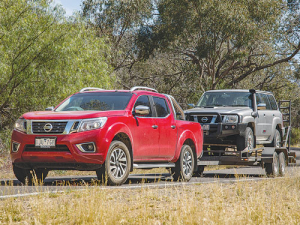 The Navara’s new dual-rate rear spring system has an integrated lower and higher spring rate that provides a comfortable ride in unladen and light payload conditions.

Nissan has enhanced the Navara’s performance under heavy loads by redeveloping the rear suspension and testing it in Australia, the country where feedback about the ute’s load-bearing ability was loudest.

No surprises there. The Aussies buy a lot of utes and the Navara accounts for nearly a third of Nissan Australia’s sales volume. The updates, initiated by Nissan Australia, and tested extensively in Australian conditions by a global contingent of Nissan ute experts, have been developed for Dual Cab SL, ST and ST-X variants in the Australian and New Zealand markets.

The only visible clue that anything has changed is the higher attitude of the rear of the vehicle when unladen, the raised setting allowing a more level attitude with a load on.

The new dual-rate rear spring system has an integrated lower and higher spring rate that provides a comfortable ride in unladen and light payload conditions, and allows higher payload to be carried without compromise in posture or ride and handling quality.

When laden, the new rear damper is designed to contact the chassis rail which causes the damper to compress and the resistance to increase – reducing lateral body movement and improving the Navara’s handling and stability.

Rural News drove the truck unladen, then with a 325kg load in the tray and finally towing a 1200kg trailer. The unladen ride is improved and gets better with a load on, and towing performance was excellent. Through miles of winding unsealed roads and on faster sealed roads through rural Victoria, Australia it was easy to forget the trailer was even there.

The changes have worked. No hitting the bump stops and not a hint of unwanted lateral movements when the loaded suspension hit a bump or rounded a bend.

Other changes to the 2018 Navara: in a series of steering adjustments, the steering ratio has been improved from 21.5:1 to a lower 19:1. This means the steering wheel is turned less to get the angle, or the degree of turn, from the wheels. And it gets an assortment of new safety and technology updates including a 360 degree camera on all ST-X grades, second row ISOFix child seat mounting points on all dual cab grades, and rear view cameras on all variants.

From June 2018 production, all Navara SL, ST and ST-X models will have a digital speedometer housed in the instrument cluster, and tie-down hook points have been either increased in number or re-positioned to help better secure load. On the RX, SL and ST Pickup grades, tie-down hook positions have been lowered, and on the ST-X grades with Utili-track, there are four additional tie-down hooks located lower within the tray.

The same two engine options remain, the most popular being the 2.3L inter-cooled twin-turbo diesel with 140kW of power at 3750rpm and 450Nm of torque at 1500 - 2500rpm. Variants are mated with a choice of a 6-speed manual or a 7-speed automatic transmission, the latter of which has a manual mode.

Midway through its product life cycle the Nissan Navara has had a cosmetic makeover and some upgraded technology.

Recently we spent a day testing out the new rear suspension upgrades to the Nissan Navara on Australian roads. Now we've tested it in New Zealand.

When it first arrived in 2005, the Nissan Navara ST-X set a new benchmark for utes.