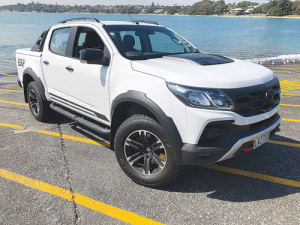 The new HSV ute is an overall convincing package.

The after-market options for utes are extensive, but there’s a big difference between a properly engineered package and a ute with a bunch of accessories bolted on.

This is the approach HSV engineers have taken with the Sports Cat: they started with a Holden Colorado Z71 and transformed the looks and handling, producing a cohesive package that feels like a different vehicle altogether.

Sure, the running gear remains unchanged – the same 2.8L Duramax diesel as the Z71, producing 147kW and 500Nm – but it rides and handles in a way the Z71 cannot. HSV achieves this with stiffer front springs, front strut braces and performance dampers. The SportsCat+ also gets a special decoupling anti-roll bar at the back, which does a great job in reducing roll in corners. It decouples when low-range is selected, allowing more wheel articulation for off-road driving.

As a handling package it all comes together nicely. The steering, turn-in and roll resistance are much sharper than the standard Colorado, inspiring confidence in the bends that few utes can match. The ride is stiffer as a result but never uncomfortably so and the better body control makes a road trip less tiring than in the standard ute as passengers are not biffed about so much.

Uncharacteristically, HSV has not made this truck faster, deciding to aim for overall capability than speed. However, they have made it stop better by adding front 4-piston forged AP Racing callipers with 362mm x 32mm rotors and a bigger brake master cylinder. The pedal requires a hefty shove, but the enhanced anchors are strong.

While some after-market body kits look a bit tacky, the overall look of the SportsCat hangs together very well. It’s an aggressive look, and the stance achieved by the 25mm lift and bigger wheels is just right.

A Hamilton company made the hard-lid and HSV integrated its lock into the vehicle’s central locking, so there’s no fiddly lock with a separate key. They also added a rubber strip at the front to prevent water dripping into the tray when the lid is lifted. A nice touch, as is the strut that prevents the tailgate from crashing down when you open it.

Inside, the dashboard is unchanged from standard except for the suede inserts on the dashboard – a touch repeated on the door inserts and centre console cover. The steering wheel is leather wrapped and the front seats have been re-bolstered to give more support. All seats are covered in leather and suede with red stitching. A nicer cabin than a standard Z71, although it’s a ute so has its share of hard plastic surfaces.

As for the question of power, it’s got plenty for what is still a high-riding ute, but if you must, you could always chip it.

How does the Aussie Holden SUV range handle the modern Kiwi family lifestyle? We found out...