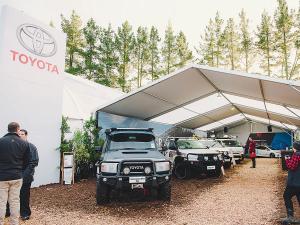 From the trendy C-HR to the powerful V8 Land Cruiser 200, these vehicles build on a 60 year heritage.

A notable SUV addition will be the Next-Gen RAV4 including for the first time a hybrid electric version to complement the hugely popular Adventure models.

The Kiwi icon and mainstay of rural NZ, the Toyota Hilux, will be hot to see, and site visitors can try their hand at the Hilux ‘Spin to Win’ game which might win them a 4WD trip with a Toyota Ambassador.

Getting its first public outing will be the new look Hiace van with lots of new technology expected to cement its position as NZ’s favourite van.

Visitors can learn more about Toyota technology in the Innovation Zone.

For example, the company says “augmented reality is the best way for people to understand how the self charging hybrid electric system and the Safety Sense package work in the new Corolla hybrid”.

For a breather, visitors can enjoy Toyota’s ‘Drive Happy’ hospitality -- coffee and toasted sandwiches to combat the winter chill.

Site: corner of I Road and C Street in the automotive precinct.