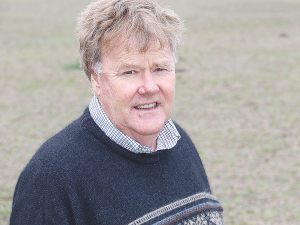 Farm consultant Lochie MacGillivray warns there is a high degree of anxiety among Hawke's Bay farmers as they head into the new season.

However, AgFirst farm consultant Lochie MacGillivray warns that - despite the favourable weather conditions - there is a high degree of angst and anxiety among farmers as they head into the new season.

On the positive side, he told Rural News that recent rains have seen soil moisture levels back to or slightly above normal for this time of the year. But MacGillivray adds that the accumulated rainfall is still behind normal. He says that does have some implications in terms of springs and sub soil reserves which may come into play later.

"But at the moment, in terms of pasture production, we are at normal or above normal growth rates for this time of the year, which is positive," he says. "We have had some nice warm days and you can really see the grass growing."

MacGillivray says stock numbers are back where they have been, but some animals have come through the winter in light condition and probably won't catch up in terms of milking and lamb growth rates. He expects weaning weights for lambs to behind normal, despite the increase in pasture covers, and that target weights for cattle will also be down.

MacGillivray believes the lambing percentages will be quite good, but cautions that few if any hoggests were mated in the region last autumn which will reduce overall lamb numbers.

"There are good prices are out there but just a decrease in stock numbers means that some farmers won't be able to take the full benefit of those increase in prices."

But against a positive outlook, problems loom. MacGillivray says farmers are facing significant cost increases for any products brought in from overseas.

"I had one client quoting me that every year they buy a pallet of Roundup. Last year it cost them $3,000 and this year the same volume is $11,000. The unit price hasn't gone up, it's just the increased cost in freight," he says.

On the Covid front, MacGillivray says generally farmers and their families are well vaccinated, but the worry everyone has is what would happen if there was an outbreak in the meat plants. He says this could cause some bottlenecks and lost opportunities.

MacGillivray says optimism among farmers should be high, given prices, but in actual fact, they are a little bit jumpy. He says after two years of droughts they are worried the rains won't come, and they realise that if there is a spell of strong westerly winds they could be back in drought. Farmers are also worried about the effects inflation and rising farming costs.

"Then you have got the whole water (three waters reform) thing with the Government and that's big. Almost across the board they are anti this Government," he adds. "Farmers feel they are just being pushed down a path without due consultation. Just about to a person they are really upset."

MacGillivray says there is a level of anxiety out on the farm with the Rural Support Trust dealing with a few more cases than normal for this time of the year.

"In essence, farmers should be feeling quite good but they are not," he says.