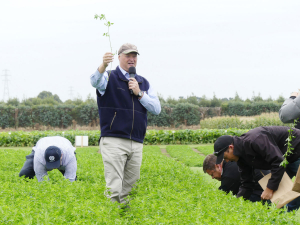 Moot was a featured speaker at the recent open day and official opening of the new Seed Force Henley research station, near Lincoln.

Standing in a plot of healthy lucerne on the station, Moot pointed out that lucerne boasts a very high crude protein level in the leaf of up to 30%, and high metabolisable energy (ME) of about 12.

As a legume, lucerne fixes nitrogen, he says.

That meant it looks “nasty” when put in an Overseer budget, and he has spent the last six months defending the use of legumes in farm systems.

“My first plea to you is not to take lucerne out and put ryegrass in with nitrogen fertiliser, as some of the farmers I’ve spoken to have been recommended, based on the farm environmental plan,” Moot explained.

“That’s not necessary. Legumes are still the most sustainable way of getting nitrogen into our farms systems and nitrogen is without question the nutrient that is limiting pasture production all the time.”

Moot said 20 tonnes of dry matter would be about 3.5% nitrogen, so 700kg of nitrogen would be required to produce it. “You can’t change that, it’s biology” he said.

There would not be a urine patch response in a pasture if the pasture  was not nitrogen-deficient.

Moot said his researchers had produced 6.5t DM/ha from a dryland pasture and 10t when fully irrigated.

But the pasture produced 20t DM when given both water and nitrogen, and 16t when given just nitrogen.

That showed that the added water wasn’t utilised efficiently without nitrogen.

“So, whenever you see a pasture and you can see a urine patch, it is telling you ‘I am nitrogen deficient and I’m using water at the same rate regardless of whether I have or haven’t got N.”

Moot says legumes are an environmentally friendly way of getting nitrogen into a system. “That’s why my research team has focussed on getting more legumes into pastures,” he said.

“And it makes a high crude protein therefore it becomes a high quality feed.”

Grow it, graze it

Moot outlined the specifics of using lucerne in a grazing system.

He showed how lucerne consists of softer palatable tops containing about 12 ME and 24 crude protein and a harder lower stem of about 8 and 14, which animals do not want to eat.

He says the ideal height of lucerne – to get grazing animals to eat as much as possible – is 25-30 cm. Growing it any longer only adds to the hard stem, not the useful tops. When used in a spring rotation, however, Moot recommends starting grazing the first paddock at about 10cm tall because starting at 25-30cm would mean the last paddock would be too tall.

“What I’m trying to do is look at paddock one so that the second time I come onto it it’s about 25-30cm tall,” he explained.

“If the last paddock gets away cut it for hay or silage. Don’t graze it because the animals will take quite a long time – 10 or 14 days -- to eat the useful part instead of two to three.”

He says it would be a mistake to think there’s another day in a break when the animals have eaten the tops.

“The problem with that is they don’t eat anything for a day because they’ve got this thick stem they don’t want to eat,” Moot explained. “Then they’re empty and you shift them onto a new break and they gorge. And if they gorge then you run the risk of animal health issues.”

He says ewes and lambs provide the best benefit out of lucerne.

With the ewes milking well and lambs putting on 300-350g/day a farmer could wean early, put the ewes elsewhere and leave the lambs on the lucerne with their guts already used to it, so there is no check to their growth.

“The lamb will happily grow 300g/head/day, so in 100 days it can go from a 5kg birthweight to a 35kg lamb now available to be sold,” Moot added.