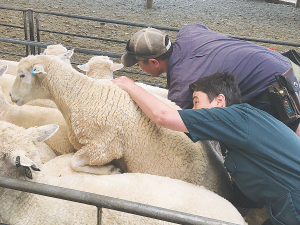 Dr Anne Ridler, pictured checking out ewes, believes farmers have something to gain if they think their culling strategy through.

Replacement rates in New Zealand sheep flocks generally vary from 25-35%. However, just what culling policy farmers should adopt is the subject of a study being undertaken by researchers at Massey and Lincoln Universities.

Culling policies seem to vary - some are based on the age of the animal, others on whether it is dry, and other just on looks.

Dr Anne Ridler, who is an associate professor of sheep and beef cattle health at Massey University, is leading this research project. She believes what to cull and not to cull is important and farmer have something to gain if they think this issue through.

She says the research project has involved investigating ewe culling and ewe deaths on 38 farms around the country this year. While the full results of the study are yet to be completed, some interesting and diverse farming practices have emerged.

"A lot of ewes in Nz are culled prematurely, before the end of their potential productive life span," Ridley says.

"Sorting through ewes for culling can be a back-breaking job and usually happens at a very busy time of the year. Farmers cull ewes for a variety of reasons, but because most ewes have no individual ID or records, often the decision is made in a split-second and based on a single piece of information."

Ridler says in most cases that decision is likely to be justified.

"However, it must be remembered that for every ewe that is culled another ewe lamb must be kept or purchased to replace her, which comes at a cost."

She says the only consistent features between farmers in the study was that they all culled their dry/dry mixed-age and two-tooth ewes while most also culled dry/dry mated hoggets. None of them culled ewes who were scanned with a single lamb or with triplet lambs.

Ridler adds that around 75% of farmers also culled their wet/dry mixed-age ewes - unless there had been an extreme weather event over lambing. Meanwhile, the other 25% never or only occasionally did so.

"In contrast, over half of the farmers keep their wet-dry two-tooth ewes, identify them and give them a second chance - as long as their udders are sound," she explains. "For those farmers who kept wet/drys, the general perception was that they are no more likely to be wet-dry in future compared with other sheep - a conclusion backed up by research."

Ridler says a key point of the findings, so far, is that there was variation in policies for culling for age - around three quarters of the farmers routinely culled for age with maximum ewe ages ranging from 4-8 years old. She says the general rationale for this was that the farmers experienced higher death rates in older ewes.

"There is very little research on death and wastage rates specifically for older ewes," Ridler adds. "However, it does seem to emphasise that if farmers keep older ewes they must ensure they are sound, in good BCS, and need to be preferentially managed.

Around 25% of the farmers don't cull on age, instead basing it on whether the ewes have good teeth and are otherwise sound.

Ridler says many farmers run a 'B' mob for the ewes they don't want replacements from, but ok for breeding terminal lambs from. She says the 'B' mob idea is a good option for ewes that might otherwise be culled but are still productive.

"It is fine for larger farms, but it may not be suitable for smaller operations."

She adds that, unsurprisingly, the most variable factor for culling decisions between farmers was in culling on type/looks/conformation - things such as body shape, white feet or a pink nose. Ridler says as the main ewe culling time approaches, it is a good time for farmers to consider their ewe culling policies and whether they are still right for their system.