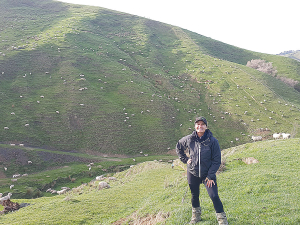 She is now repaying this passion by promoting the country’s ovine sector to the world via her vast network of social media channels.

Almeida, an animal science graduate, first fell in love with sheep at a field day back in her home country of Brazil.

“Overseas experience, living abroad, learning a new language were all exciting things I guess that would be listed alongside sheep farming. But none was as important as learning all about sheep farming in NZ,” she told Rural News.

She sent over 500 emails over a two-year period, eventually receiving a reply from a Central Hawke’s Bay ram breeder who was happy to take her on.

Initially, Almeida meant to stay on in New Zealand for three to four weeks but that has turned into five years working on farm.

She says the mindset of Kiwi farmers is admirable.

“I usually say to farmers in Brazil that whatever Kiwi farmers decide to do they will put their mind and heart to it and will succeed at it because of their mindset,” she says.

“The do-it-yourself, team and community spirit, hard work, right attitude, initiative, incredible resilience and honesty are in my top 10 Kiwi farmer traits that I highlight to Brazilian farmers when I get asked what the secret to the sheep farming success in NZ is.”

Life in New Zealand was ‘a shock’ to start with, Almeida concedes.

“Any big city has its challenges but it was quite a change coming to NZ and living here,” she says, adding that the culture was another shock.

However, she found New Zealand is more relaxed.

“I felt so welcomed, and absolutely loved the community spirit, the strong will to help others so everyone gets a chance to try,” she adds.

“On the other hand, it is not that easy to make friends here. Kiwis are more reserved, don’t show or struggle to show affection as naturally as we [Brazilians] do.

“But they have never judged me from being who I am in any place I have worked and any team I have been part  of.”

Since arriving in New Zealand, Almeida has taken to social media using her ‘Canal Sheepnutter’ Facebook and Instagram accounts to introduce thousands of people to New Zealand’s way of farming.

She says it came out of a need to find a purpose and something to help people in Brazil and from further afar.

“So, I started sharing my day to day life on the farm firstly with my friends on Facebook, then I created a page to widen out my audience in South America,” she says.

The page led to invitations to speak at farming events in Brazil.

“It always amazes me how other countries see NZ farming as the leader when it comes to efficiency and sustainability, more than our own Kiwi farmers give themselves credit for,” Almeida told Rural News.

“Working, studying and sharing my life in NZ has helped me immensely in building my portfolio and recognition in the sheep farming sector in Brazil.”