Calm animals much easier to handle 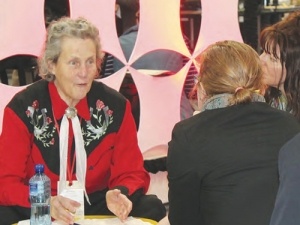 "Animals afraid of people will be much less productive," she told the New Zealand Veterinary Association conference in Hamilton.

Stress in animals depends greatly on their previous experience.

"A basic principle in working with animals is that a calm animal is easier to handle. Once an animal gets frightened – if during a procedure something bad happened – it will take it 20 minutes to calm down," she says.

"If you have been in a near car accident you know how long it takes to calm down."

If the eyeball of a horse or cattle beast is showing, it is really upset. "That's scientifically validated because if you give drugs like Valium you don't get the eye white. That proves there was fear."

The signs that a cow or horse is starting to get fearful include tail swishing; that is not friendly as with dogs.

"When a tail swish gets faster and faster... then it'll be flight or kick. Eye white showing, head up, ears pinned back... and then they poop more; you've scared the you-know-what out of them. You don't want to be doing that."

"An animal is very specific in the way it thinks; it takes a snapshot, like the labcoat, [so if you wear] another kind of coat, it's fine. Or certain vehicles are bad: cattle have learned 'one four wheel motorbike brings me food, but three means trouble – they're coming to round me up'.

"Look at what the ears are doing. Cattle, sheep, all your grazing animals watch with their ears. Observe where the ears are pointing; what's your animal attending to? Watch that."

We should get away from restraint methods that hurt. If you handle an animal roughly it changes its physiology. If laboratory animals are handled roughly, the results will not give normal physiological values.

The final five minutes for an animal going up the chute in a meat plant is really important.

"Poking pigs and jamming [them with] stuff will get you pale, watery, soft meat -- high lactate. Cattle poked with electric prods will get you tough meat. That last five minutes going up that stunning chute does matter. Getting animals excited and fearful changes their physiology."

Grandin says she is often asked if animals have emotions. Prozac works on dogs, but if their brains came from another planet, it would not work. Animals have seven core emotions: fear, rage, separation stress, seeking, sex, mother-young nurturing and play. The most important emotion for handling is fear.

"Animals feel pain. Castrate a lamb or castrate a bull, it hurts, but he doesn't know what he is losing. That's probably the difference between an animal and a human."

If you force an animal – during a procedure or forcing a cow into a milking stall – the fear hormones go up. "If you train animals to cooperate with restraint you will have a lot less fear stress," she says.

She cited a study in which young heifers walked through a handling race, then coming in later for AI, had better conception rates because they weren't scared of the handling facility.

Animals can acclimatise: their first trip on a truck is a lot more stressful than their ninth trip, unless the first trip is very traumatic then following trips will be worse.

Animals that fear people are less productive; this is well documented, Grandin says. Paul Hemsworth in Australia has worked on this for a long time. Fearful dairy cows have lower conception rates; dairy cows that approach people have better somatic cell counts.

Animals don't think in words; their memories are sensory based: they think in pictures, smells or tone of voice. They associate good and bad things with certain sounds. The sound of one type of truck means they will get fed. They can even differentiate between different makes of cars.

"If you can think in a sensory way it will help you imagine what an animal is thinking," she says. "An animal's first experience with a new person, a new vehicle or a new milking set-up must be a good experience."

In discussion with a US dairyman planning a new rotary milking platform she advised "take the time to train heifers, don't just shove them in there. Make sure their going in there is a good first experience".

• A proponent for humane treatment of livestock, Dr Temple Grandin is a designer of equipment for cattle and pigs during slaughter. She is the author of books on livestock handling and transport and has served as a consultant to develop animal welfare guidelines for corporations such as McDonalds.