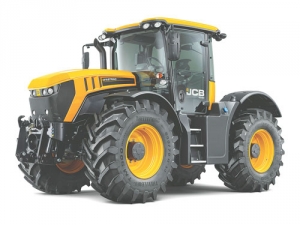 The JCB Fastrac is a little like Vegemite — you either love it or hate it — but it has now been around for 25 years.

Originally designed as a high speed tractor for the British armed forces, the vehicle quickly found favour in agriculture, not only for its high speed capability that suited contractors, but also its ability to accept implements to the front, rear and mid-mounted.

Recently arrived in New Zealand, the new 4000 series replaces the outgoing 2000 series and should find favour with Fastrac fans, as the company claims it's more powerful, but more economical, it's stronger but more nimble and it's more versatile, but easier to operate.

The new model stays true to the original design with multiple implement mounting points, all round suspension and a high spec braking system. However, it sees improvements to engines, transmissions and a new cabin design.

The three models are powered by a 6-cylinder, 6.6L AGCO Power engine which meets Tier 4 Final emission regulations with the use of SCR / Ad-Blue. Rated power outputs for the 4160, 4190 and 4220 models is 160, 189 and 217hp respectively at 2100 rpm, which climbs to a maximum of 175, 208 and 235hp as the engines come under load.
Transmission is taken care of with a Fendt-sourced CVT unit for stepless forward and reverse speeds, and the ability to choose different strategies for power or economy, fixed engine or PTO speeds and fuel saving high speed travel. The latter sees the machine achieve 60km/h at 1600rpm or 50km/h at a miserly 1400rpm.

All models are fitted with four wheel steer (4WS), which automatically reverts to 2WS at speeds above 20km/h and can provide alternative steering modes such as delayed 4WS, true tracking and crab steering. The company also says the 4WS allows the tractor to might tight headland turns with a sub-10m turning radius.

An optional Rapid Steer system offers adjustable ratios with the high speed selection seeing the tractor going from lock to lock with two turns of the steering wheel.

The hydro-pneumatic suspension units in each corner make for a comfortable ride, and helps eliminate 'power hop' in draft operations, and an advanced suspension option provides side to side leveling, and allows the machine to squat to allow easy fitting and removal of de-mount attachments

At the back end, lift capacity sees a useful 30% increase to see 8000kg, and the front end is capable of moving 3500kg. The central load platform is rated at 4000kg. Hydraulic flow is by way of a closed centre-load sensing set-up that sees a healthy 148L/min output.

A new Command Plus cab sees that the operator is taken care of with more glass and better cooling and ventilation, and the options lists sees the availability of roof window, cool box, MPS connection and a high sped heated suspension seat. This is further enhanced with options such as GPS Ready, and LED worklights that turn night into day.