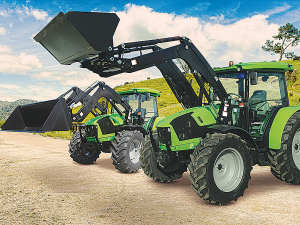 A wide range of Deutz-Fahr tractors will still be on site at Fieldays this year despite shipping delays.

Although the New Zealand release of several new tractor product lines have had to be pushed back to later in the year because of shipping delays, a wide range of Deutz-Fahr tractors will still be on site at Fieldays.

On the specialised front, the Kiwi Classic tractor, aimed at the kiwifruit sector, will be joined by the 5105 DV TTV, targeted at the viticulture and horticultural sector. The latter machine boasts Deutz-Fahr’s stepless transmission, a flat operator platform, Category 4 cabin filtration and a 100l/min hydraulic pump, contained within an operating width of only 1.19m.

The expansion of the Agrofarm range, sees the 85 ROPS and 115 Cabin models joining the existing 100 and 115 ROPS models. The wet clutch offering at the utility end of the 4-cylinder range, means the Agofarm features true 4-wheel braking with inboard front axle discs, 100% locking front and rear differentials and a low centre of gravity.

The 5 series utility cab tractors target the key 105 to 125HP sector – with the aptly numbered 5105, 5115, 5125 models. These 4-cylinder cab tractors feature 3.8 litre FARMotion engines, 4-wheel braking, a Stop&Go clutchless operation and oil flows of up to 90 litres per minute.

The larger 6135G and 6155G tractors will also be on display, to showcase a format that is becoming increasingly popular with the dairy sector as feed trailers and mixer wagons are getting bigger.

This offers the same five range /six-step powershift layout as the other models, with the convenience of an armrest mounted, electronic joystick for speed selection.

At the premium end of the product offering are the 6215 TTV, 7250 TTV and flagship 9340 TTV. All feature the premium TTV continuously variable speed transmission, complemented by the I Monitor 3 touchscreen control terminal. This is completed with AGROSKY GPS guidance, configurable headland management and the ability to recall saved user/implement profiles.