Quads an indispensable and major part of farm management strategy 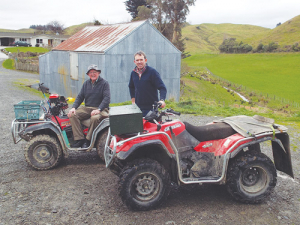 Gordon (front) and Duncan McIntrye with their omnipresent Suzuki quads.

On a typical farm, ask the farmer what he loves most and he may answer: wife, dog and quad; and if the first is out of earshot the order may differ.

Honui Land Ltd is run by Donald McIntyre’s family on 270ha in the Pohangina Valley, 40km north of Ashhurst, while the 130ha home farm is near Shannon.

Quads feature large in the running of both properties, used daily for stock inspection, feeding and maintenance. The standout brand is Suzuki. McIntyre chose the brand in 1988, when he leaned his struggling step-thru 90cc against the shed wall and took delivery of a new Quadrunner. This sowed the seed for a brand loyalty that hasn’t waned since.

MacIntyre senior told Rural News their vehicles are well looked after and changed on a two-three year cycle; he reckons they’ve had about 15 different machines over the years, all Suzuki. The latest, earlier this year, are two new machines.

Up on the high ground, son Gordon favours a KingQuad 400, and in the lower country father Donald says the 300 version is the machine for him.

So why the enduring love affair with this brand when there are so many choices?

The McIntyres, particularly Donald, believe the machines are a little lower than most other brand, making them easier to mount and dismount. More importantly, the lower centre of gravity makes for a safer ride on difficult terrain. They also like the large rear rack system, ideal for taking conventional hay bales to outlying stock and a great perch for the other love, the farm dogs.

The key feature, which continues to impress, is the mechanical transmission with five main speeds and three selectable ranges. They prefer this system to the increasingly popular CVT style set-ups, not least because once selected they know they are in-gear and don’t have to rely on maintaining engine revs to keep the CVT belt engaged with its drive pulleys on downhill sections. Notably, the low ranges offer huge traction, used often when, for example, they need to pull a waterlogged sheep out of a drain. Then it’s a soft strop and a steady pull to get the wayward animal back onto dry land.

The 300 does what it’s meant to without fuss: it’s nimble and easy to steer for McIntyre senior, who also likes the external crashbar system around the machine. This creates a well around the foot well area that allows carrying a sheep on its backside in the well; suitably restrained it can be taken home without a trailer or without hog-tying it to the rear rack.

The 400 favoured by son Gordon is slightly heavier so is seen as being more stable, has extra power in reserve and is fitted with larger wheel and tyre equipment said to make the ride more comfortable on tough terrain.

So when asked if their next move would be to a UTV, their answer is a terse, “I don’t bloody think so!”