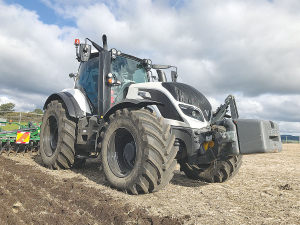 Murdoch Agricultural Contracting’s Valtra T174 is the pride of its fleet.

Murdoch’s background includes working for other contractors and a spell in sales at a tractor dealership. This was before he decided that there was a niche for someone to service lifestyle blocks in the area.

He started out with two old and slow ROPS tractors that, although reliable, didn’t endear themselves to his staff. This led to the arrival, in 2017, of a 2009 vintage Valtra N141 with a loader, cab, and 50 km/h gearbox, making the trip to Taupo fast and comfortable.

Still with the business, the tractor still starts first time, lending itself to tasks like raking, wrapping and stacking.

Next to arrive was a 2013 Valtra N163. “It’s one of the nicest loader tractors I have ever owned or driven,” Murdoch says. “It’s a four-cylinder, so it’s compact and turns on a dime – yet it delivers 160hp so it is big enough for any job.”

He also praises its front and rear suspension, the 160 l/min hydraulic output and electric control.

The latest Valtra in Murdoch’s shed is a T174, spotted at a demo day pulling a set of deep rippers at 400mm depth. The machine exceeded expectations for power, torque and fuel efficiency.

He says the T174 is specified with auto-steer, front PTO, a smart touchscreen, a high-spec Evolution seat, LED light package, fridge and rear and side window washers – all at a price he says was “considerably cheaper” than other leading brands.

It is fitted with a powershift transmission, like the other Valtra’s in the fleet, and Murdoch says that a powershift is safer on hills as it doesn’t run away on the operator.

“The driver just picks a gear for uphill and a gear for downhill,” he explains. “The system also has an auto function, so it can be driven like a vario set up, while also offering a set of creeper speeds, that we used last summer on a conventional baler at speeds of around 100 metres per hour in a heavy double row.”

Ease of operation is taken care of by a touchscreen, which at Murdoch Contracting are fitted to every implement the business owns. That means the operator picks an implement, confirms the choice and all the functions are set – including the correct hydraulic oil flow and assigned functions to buttons. Likewise, each driver has their own profile, so the tractor is set up the way each operator prefers.

“One of our drivers, Sam, spends the southern winters working in Canada and the US, so she is no driving slouch and she is impressed,” Murdoch says. “She got in the T174 and said, ‘it’s a spaceship’ but she worked it out in about 10 minutes.”

Offering exceptional weight distribution, the tractor is very stable, so much so, that when a driver forgot the front weights when taking a 4.5m roller drill to a job, he discovered they were superfluous as the tyres were biting in and gripping even on sloping cultivated land.

This has proven to be a theme. When the tractor was loaned to a contractor, who normally uses duals for everything, they travelled everywhere on the machine without them.

Murdoch reckons that with 600-hour service intervals, the T174 offers massive savings compared to other tractors.

“The value for money is exceptional. I would love a fleet of them,” he says.