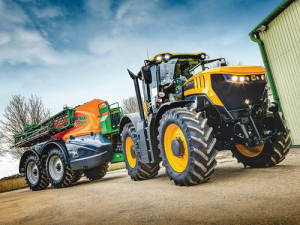 The 8330 is the fastest, most powerful and most versatile tractor released by JCB.

The NZ distributor of JCB says the new flagship of the 25-year-old Fastrac range continues to rewrite the rule books.

“The 8330 is the fastest, most powerful and most versatile tractor yet released by JCB,” says CLAAS Harvest Centre product manager – JCB, Steve Gorman.

“Everything about it is designed to maximise productivity, whether it’s heavy cultivation at 7km/h, GPS-guided spraying and spreading operations at 40km/h or hauling fully laden spreaders, sprayers and wagons at road speeds up to 70km/h.”

An 8.4L AGCO six-cylinder engine with twin turbochargers delivers 14% more power and 10% more torque. Rated power is 335hp, rising to 348hp under full load, and peak torque is 1440 Nm at 1500 rpm, providing the ability to ‘hang on’ as conditions become more challenging.

Its two-range continuously variable transmission has six modes, including an ‘active traction’ function to maintain grip during heavy draft work (with information drawn from a radar speed sensor), hydraulics position control and cruise control to manipulate engine torque and maintain traction for the most cost-efficient performance.

An improved cruise control function ensures optimum use of power and torque, with seamless acceleration and power delivery, and ultra-fine speed control to suit every operation; the Powershift mode has 15 speeds for field work and 10 for road use.

A new hydrostatic dual-steering system uses two hydrostatic systems and an advanced control valve to continuously monitor pressures and flows in both systems, and it offers failsafe steering, even in the event of hydraulic or engine failure. The selectable ‘rapid steer’ function reduces the number of turns lock-to-lock to just two for fast and easy headland turns less than 10km/h.

The Fastrac 8330 has 50:50 weight distribution over both axles, which can be set to achieve a three-metre track width for controlled traffic and row crop applications.

An active rear suspension system quickly responds to the weight of rear- or deck-mounted implements to maintain stability, and the robust coil spring and damper suspension on the front axle contributes to the machine’s ride.

Stopping is reckoned 15% quicker than any conventional tractor, achieved by external disc brakes and powerful twin callipers on all four wheels, and an ABS anti-lock system.

A separate hydraulic circuit with six double-acting electric spool valves provides a flow rate of up to 140L/min, ideal for the high demands of implements such as air drills.

The mid-mounted Command Plus cab is said to be the largest on the market; it has forward-raked ‘A’ pillars to allow bigger, easy-access doors, deep door glass, a near-vertical windscreen and rear three quarter-opening windows to ensure good all-round visibility.

The high-spec air seat can swivel up to 50 degrees right and 20 degrees left, allowing the operator to monitor rear-mounted or trailed equipment.

Portable power on the farm

Erratic weather and seismic events, more frequent these days, are prompting many farmers to have standby generators on site.