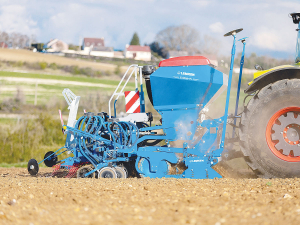 Just a year after the market launch of the Solitair 9+ pneumatic seed drill, manufacturer Lemken has introduced its new ‘Duo’ version with divided seed hopper.

This machine offers the option of simultaneously spreading seeds, fertiliser and catch crops. Available in working widths of three or four metres, the seed hopper on the Solitair 9+ Duo offers a capacity of 1,850 litres. This can be split 50/50 or 60/40, as a result, offering two application variants.

In the single-shot version, seed and fertiliser are combined downstream from the two metering units in each of the two hopper segments. From here, they are delivered to the double disc coulters via a single seed pipe and deposited in a seed furrow. This allows a starting dose of fertiliser to be added for winter sowing or a complete fertiliser application for summer sowing.

The double-shot system is said to provide greater flexibility, as the two components flow separately to a double disc coulter via doubled distributors using twin seed pipes. These can then be spread either in a single row, as with the single-shot method, or separately and alternately in two rows following a quick exchange of the tramline cartridge in the distributor.

In addition, the sowing depth of every other row can be adjusted separately via the pressure roller up to a difference of 5cm. This allows two different seeds to be placed at different, optimum seeding depths or inter-row fertiliser application during seeding.

In other Lemken news, the company has introduced the OptiStone automatic overload protection for its Juwel, Diamant and Titan ploughs. Comprising of a closed system of highly stable leg plates, which protects against dirt and foreign objects, a newly designed swivel bracket ensures high lateral tripping forces and optimal plough control in stony soils. When an obstacle is encountered, the new overload element can deflect up to 37cm upwards and 20cm sideways. The tripping forces can be continuously adjusted from the comfort of the driver’s seat to adapt to changing soil conditions.

If the system catches below a slab of stone or roots, it is additionally protected by a doublecut shear bolt to prevent damage to the plough.

The plough bodies are firmly connected to the three-dimensional bearing points and therefore cannot unhitch – a clear advantage compared to the overload protection systems with four-point suspension commonly found on the market.