An efficient way to take out trash 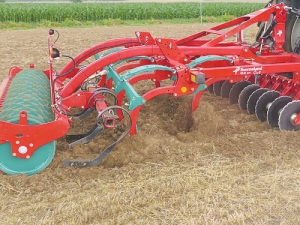 The Kverneland CLC cultivator has been around for a number of seasons.

It has proven to be a versatile cultivator for stubbles and the 3.0m version has led many campaigns on Kiwi farms.

However, the new CLC Pro-Cut will widen this appeal to many farmers: the addition of a gang of cutting discs and re-spacing of legs will make it more desirable in being able to deal with far greater levels of trash.

The machine consists of four zones: firstly a bank of 500mm diameter scalloped discs, each mounted with a dyna-torque rubber coupling to accommodate shock loads. Depth control is controlled by a double-acting hydraulic ram mounted beneath the headstock.

The second zone is made up of seven of the familiar CLC heavy duty legs that use leaf springs for overload protection and are capable of working depths from 5-30cm. Existing users will be pleased to see leg spacing has been increased to 440mm to promote trash flow through the unit.

Also included in the standard specification are quick change ‘knock-on’ points for a fast turnaround.

Following the cultivator legs is a bank of spring steel levelling tines which helps tidy up the work and reduce the power required by the Acti-Pack roller assembly that finishes off the levelling action while consolidating the seedbed to retain moisture.

Weighing around 1870kg, the minimum power requirement is a well-ballasted 100hp tractor – up to a maximum of 240hp if required.

Deals with trash in a flash