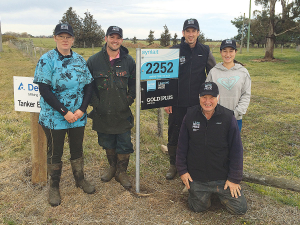 High performing suppliers to Synlait, Canterbury, were honoured at an awards ceremony at the annual supplier conference in Christchurch in July.

“This is the fourth Synlait Dairy Honours Awards and the standard of performance increases yearly,” said chief executive Leon Clement.

“The awards are open to all Synlait milk suppliers, and many winners are Lead With Pride certified. Each award winner and their team have exceeded requirements to show excellence in dairy.

“I congratulate each winner, in particular Kieran McCall of Golden Dairies Ltd who won the ANZ Supreme Lead With Pride Award.”

McCall and his wife Erin, who farm near Ashburton, were overseas at the time but were represented by his parents Graham and June.

The judges were impressed with finalists’ innovative approaches to best practice in their dairy businesses.

The company’s Waikato suppliers will take part in the 2019-20 awards, says Clement.