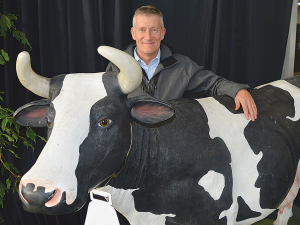 Dairy farmers are being urged to tell authorities about “concerning activity” by helicopters and drones.

But farmers should also be aware that drones, helicopters and fixed wing aircraft have legitimate business in rural areas, like checking power lines and spreading fertiliser.

DairyNZ head of South Island Tony Finch says it has had reports of helicopters and drones flying low over Southland farms where they disturb stock.

“This is concerning for farmers and is an animal welfare risk,” Finch told Rural News.

“We have encouraged farmers to report incidences of concerning activity by helicopters and drones to the Civil Aviation Authority (CAA). Activist activity against farming has occurred previously and, while we cannot confirm a link between the two, we want farmers to be aware of the potential for this.”

Meanwhile, Finch says many aircraft operators have legitimate business and should be allowed to operate without interference.

Finch says previous interest in wintering and cows on crops has prompted a response by the agricultural sector.

DairyNZ and Beef + Lamb NZ have been actively sharing information, tips and advice to farmers, to encourage farmers to farm in ways that can reduce the risk of excessive mud in their paddocks, keep their cows dry and well, and protect their soils and waterways.

But FGNZ chief executive Martin Taylor says it has nothing to do with this campaign to date.

“We are not funding it nor are we aware of any filming being undertaken from aircraft or helicopters.

GoDairy campaign back on the go

The dairy industry is making another push to attract workers to staff-strapped farms.

New Zealand dairy farmers continue to play a key role in a post-Covid economy as a sustainable producer of milk for the world.

OPINION: The Hound understands that there is a fair bit of consternation and nerves among the big farming lobby groups - namely Feds, Beef+Lamb and DairyNZ - that they are 'losing the room' in terms of farmer support.

DairyNZ is encouraging Canterbury farmers to look out for each other and access support agencies for assistance amid flooding in the region.

Farmers want stakeholders to work together

DairyNZ says it will work more closely with other industry stakeholders on major issues facing farmers.