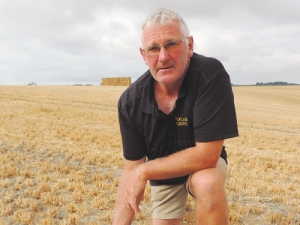 As first reported in Rural News February 3, the world record attempt took place in January this year and was ratified by GWR on April 15 with a yield of 13.8t/ha from the Blackman Agriculture bred variety 776.

“It was like being back in school knowing you had done really well on a test, but until you receive the final mark, it is an anxious time,” Warren Darling commented.

He says all three generations of the Darling family came together on the day of the record attempt: it was a family affair and a momentous day for the Poplar Grove team.

“The satisfaction from achieving world record status is incredible,” Darling adds. “It is outstanding that the South Canterbury region of New Zealand is recognised on the global stage for growing world record breaking crops.”

The 2015 Grain Harvest has been a game of two halves, according to survey results released by the Arable Industry Marketing Initiative (AIMI).

The Waikato Regional Council is urging farmers help stop the spread of dangerous weeds in the Waikato region.