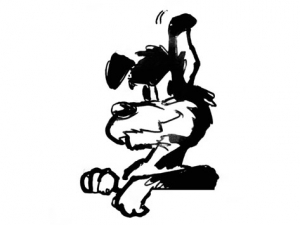 Back in January the Darlings harvested their barley crop (as then reported in Rural News) and recorded 13.8t/ha. Despite this measurement being checked, verified and okayed in NZ by a plethora of officials, this was not good enough for the folk at the Guinness Book of Records. However, some three months later, the good folk at Guinness have at last accepted the achievement as a record and verified it at the 13.8t. The Hound extends his congratulations to the new world record holders for a barley crop. As Captain Blackadder would say, “Well done, Darling.”

Over the years, a mate of the Hound’s has always been quick to point out to him people in roles whose names either match or clash with the organisations they work for.

Save the planet, eat meat

The Hound had a bit of a giggle when he saw a recent US study that reveals a diet heavy in some fruit and vegetables does the planet more harm than eating meat.

This old mutt's colleagues at Rural News recently received a curt and nasty email from one Briar Smith about the less-than-complimentary review this publication gave Mike Joy's latest book about water quality.

The sanctimonious lot from Bitch & Complain (Fish & Game) have spat the dummy and walked away from the Land and Water Forum – like a petulant, spoiled child in a blaze of self-interested publicity.

Speaking of Fonterra, the Hound received a curt note from a failed board candidate in last year's election...