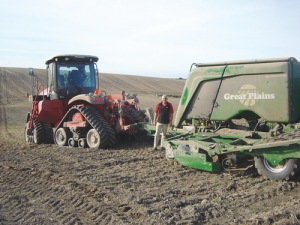 Darling and his wife Joy farm 450ha of coastal land on the south side of Timaru and are dedicated cropping farmers who grow barley, wheat and canola. When they found out the existing world record for barley had sat at 12.2t/ha for 25 years they decided to give it a nudge.

Though breaking the record had needed a smidgeon of luck, Darling believed the planning centred on three key areas: soil fertility, agronomy and climate.

Over the last eight years the Darlings have used a minimal tillage system largely centred on the business’s Great Plains Simba SL500 cultivator that uses a combination of discs, tines and rollers to incorporate previous crop residues back into the top levels of the soil profile, and thereby increase soil organic matter.

The work cycle for the crop is relatively simple with base fertiliser requirements taken care of post-harvest, and a single pass with the SL 500 to start residue breakdown. Any volunteers are taken care of with an application of Roundup until the autumn, when drilling takes place with a Great Plains Centurion cultivator drill.

The use of the SL500 followed by the Centurion helps reduce the number of passes and control the killer of all crops – compaction. The effects of compaction are further mitigated by the use of a tracked Versatile tractor for the cultivation and drilling. Any post-emergence work with fertiliser or spray is done by a conventional tractor operating on tramlines.

For the best agronomy advice Darling worked with his consultants, The Agronomy Group and The Exclusive Grain Group to ensure the seed best suited to the coastal location; further advice was supplied by Ballance Agri-Nutrients and Bayer Crop Science to get things just right.

The weather played its part: good rainfall during the winter ensured plenty of soil moisture during the early growing season, and a hot dry summer brought the crop to maturity.

Warren pointed out that “our coastal location gives rise to a large number of easterly breezes. These help keep the disease pressures down and give long cool nights during the grain fill period.”

With the crop grown, there came the harvest, a complicated part of the equation because it required Guinness protocols to be followed with JP’s serving as independent witnesses in the paddock. Then crop samples had to be sent to AsureQuality, Palmerston North, and confirmations given by SGS that all World Record rules had been met.

Warren and Joy were surprised the existing record had stood for 25 years, but in true Kiwi fashion, “they gave it a go, and knocked the bugger off”.

Chequebooks out for takeovers at home and away

Well known for its Centurion and Spartan drill series, Great Plains has recently introduced the all-new Saxon series, with min-till work in mind.

What's new in machinery and products.

With its manufacturing base in the corn belt of the US Midwest, Great Plains has a reputation for building strong and highly accurate planters.