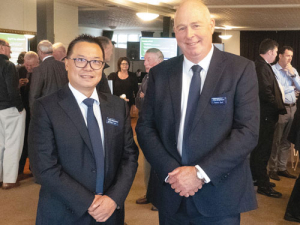 The sale was approved by a special resolution at the company’s annual meeting in Christchurch on October 30. The resolution required 75% approval and passed, despite opposition from the floor that the company would be downsizing and lost to ownership overseas.

Under the agreement, PGW will sell 100% of PGW Seeds – including its interests in Australia and South America – for NZ$421 million. DLF Seeds will also assume or repay PGW Seeds’ net debt outstanding at June 30, 2018 of about NZ$18m.

Speaking after the meeting, deputy chairman Trevor Burt emphasised that he had always believed the sale was in the best interests of all shareholders.

“The board’s unanimous, everyone agrees. We would have been remiss not to bring [the offer] to the shareholders,” he told Rural News.

Burt expects the regulatory approvals by the first quarter of next year.

However, he also concedes restructuring “that involves people” will necessarily follow from the sale.

“I think it’s inevitable that the corporate structure that supported a $1.2 billion business and now is an $800m business [must undergo] some review.”

Burt says there is “potential” to distribute the proceeds of the sale to shareholders.

“We need to determine what’s a prudent level of debt and capital we need to keep in the company, and that’s relative to the earnings outlook and what sort of leverage we deem is prudent,” he explained. “So we’ll work on that and certainly have that in the near future.”

The meeting also confirmed the previously reported annual result of an operating EBITDA of $70.2m (up 9%), net profit after tax of $18.9m (down from $46.3m) and fully imputed dividends of 3c per share.

“In particular it shows the strength of PGW’s rural services businesses. Almost all our NZ businesses were up on last year.”

Meanwhile, PGW chairman Alan Lai announced his retirement from the board, which he has headed since Singapore-based Agria Corporation took a majority shareholding in the company about 10 years ago.

Another Agria appointee on the board, Joo Hai Lee, has been appointed interim chair with Burt continuing as deputy chair.

Burt says the board’s composition and governance will be reviewed and the market will be updated on outcomes in due course.

“On behalf of the board, I wish to offer our sincere thanks to Alan for his leadership and dedication since his appointment as a director in 2009, and wish him all the best for the future.”

Lai told the meeting that he’d always have a great fondness for NZ and for PGW.

“The work Agria has been able to do to benefit PGW and NZ has not yet finished. But I think that my time in leading PGW as chair must come to an end as I need to focus on the next phase of my career and spend more time with my family.”

PGG Wrightson (PGW) ended a bumpy year with record profit, a “transformational” sale of its grain and seed business and many changes of board and management.

PGG Wrightson (PGW) earnings are down on expectations after a “transformational” 2019.

Effective management of worms in sheep, cattle and other ruminants is no longer a one tool job.