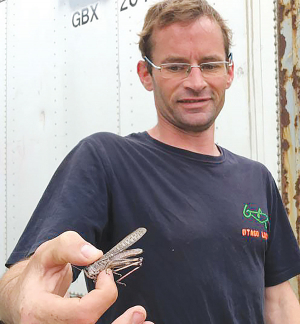 Malcolm Diack with one of his locusts at his farm overlooking South Dunedin. Photo: SUPPLIED.

Diack first farmed locusts as feed for frogs which he rears as a hobby. Discovering he was good at it, he won certification three years ago to farm them for human consumption.

He says while it was hard to guess “who’s up for it and who’s not,” the AgResearch finding is in line with other researchers and his own experience in trying to get people to eat insects.

Diack feeds his locusts on fresh grass harvested mostly from public reserves and verges in and around Dunedin and out onto the Taieri Plain, avoiding areas perhaps sprayed.

Locust numbers vary with the time of year, but when running at “full speed” he says 8-10kg of fresh grass a week produces 3-4kg of locusts.

Diack sells the locusts live, delivered by overnight courier. Customers include restaurants. He also sells some as animal feed to zoos.

He concedes it’s “slightly intimidating” for the public to receive live locusts which they must kill themselves by freezing, rather than something processed and ready for use.

However, he has experimented with dehydrating and grinding them into a flour. Baked into brownies and tested on friends and family it “went gangbusters,” he claims.

“No-one knew the difference and was happy to eat them.”

Diack has also experimented with locusts covered in chocolate or embedded in lollipops.

“That’s where we’re heading in the last half of this year, to make some foods that we can package and sell -- processed food rather than just live locusts.”

While insect protein is billed by some as a way to save the world, Diack doesn’t see himself as an environmental crusader. However, he is aiming for maximum environmental sustainability, using solar power, a dehydrator to capture and recycle water, and trying to re-use greenhouse gases and the locust droppings as fertiliser.

“I’m doing it because I love animals and insects and I work well with them,” he said.

In the AgResearch survey of 1300 people self-selected through Facebook, 67% said they were likely or very likely to try insects as powder or flour baked into other goods.

Over half (55.6%) said they would likely consume fried insects.

Asked to rate their interest in eating native species, participants said they were more likely to eat black field cricket nymphs and locust nymphs, followed by mānuka beetle and then huhu beetle grubs – suggesting a clear preference for crunchy rather than “squishy” insects.

AgResearch social scientist Penny Payne, who ran the survey, says the three most referenced factors are texture, “disgust” then taste. That differed from previous studies where disgust was ranked top.

While insects are an excellent source of protein and healthy fats, with high levels of vitamins, minerals and essential amino acids, they are seen as inappropriate or unappealing in Western societies.

Payne says the reasons are culturally and socially complex, notably psychological barriers such as disgust toward insects as food, poor presentation of insects as an appealing food choice, and lack of familiarity.

“In particular, in most Western countries people may associate insects with connotations of pests and disease transmission, due to this being the most common way they are portrayed.”

However, 60% thought that eating insects would be a more environmentally sustainable option than eating beef, lamb, pork and chicken from traditional New Zealand farms.

Meanwhile, Payne herself was trying out cookies on her Ruakura colleagues, made with about 3% cricket flour, which she said gave a nutty and earthy flavour.

“I should’ve put more in actually. I’ve made them a few times and I put more in last time and they were more nutty and flavourful.”

She says the texture was interesting -- “a little bit gritty once you get the legs in there”.

Getting to the gut(s) of methane problem

International research led by New Zealand scientists has led to an important discovery in the quest to lower global agricultural methane emissions.