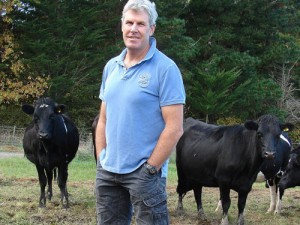 Chair Murray King concedes that despite significant efforts by LIC its automation business has seldom been profitable.

MSD Animal Health, a division of listed US multinational Merck & Co., is paying over $30 million for the business. The deal includes LIC's new generation Protrack systems for customers with legacy technology, as well as associated software development.

LIC says it will continue providing service and support to customers through the transition. Under the deal, Protrack operating systems will work with LIC's herd management system, MINDA.

The farmer co-op will be able to access data generated by the automation technology for its research and development activities.

MSD will merge its latest acquisition with its Allflex Livestock Intelligence unit, which has manufacturing facilities at Palmerston North.

Chairman Murray King says the divestment of the automation business is in line with LIC's refined strategy and will allow the co-op to sharpen its focus and play to its strengths.

"We are confident this is the best way forward - for the technology, for our farmers who have invested in these systems and for the wider co-op shareholder base," he says.

"MSD Animal Health has extensive scientific and technological capabilities that can take this technology to the next phase and deliver more value to farmers."

LIC has a long-standing relationship with MSD Animal Health, through its Allflex business unit and the companies will work together to support farmer customers through the transition.

King says in making the decision to sell, it was important to LIC that the buyer would continue to support its existing farmer customers in New Zealand. He says the sale concludes a longstanding concerted effort by the co-op to attempt to grow the automation business and make it profitable, with moderate success.

Last year, LIC shareholders voted down a board proposal to purchase a stake in Israeli agritech company Afimilk, which had included a potential subsequent transaction for Afimilk to purchase LIC Automation.

Following this, the board agreed to reintegrate automation into LIC to try to enable the business to become cashflow positive and break even.

"We know automation delivers a lot of value on-farm, but despite significant efforts by our people, the automation business itself has seldom been profitable, partly due to the stabilisation of cow numbers in NZ dairy and limited traction in international markets," King concedes. "This divestment will allow us to focus on delivering value for our farmer shareholders."

LIC boss to step down

LIC chief executive Wayne McNee will leave the farmer-owned co-operative in November after eight years in the role.