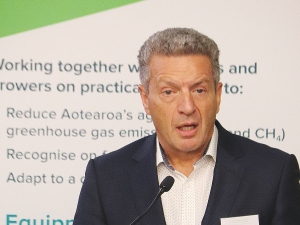 Michael Ahie says the farm-level system will enable each farmer and grower to clearly see the direct impact of their on-farm decisions.

He Waka Eke Noa (HWEN) chair Michael Ahie says the approach put forward by the primary sector climate change action partnership in its report to the Government on how to deal with on-farm emissions is the best option.

Ahie told Rural News that it's important to remember that NZ has a biological economy and that the ETS is not the answer to dealing with agricultural emissions.

"There is seriously good science behind the recommendations," he says. "To the critics I say - what is the alternative? If you can come up with one that is going to be better for NZ, let me know."

Ahie says the farm-level system will enable each farmer and grower to clearly see the direct impact of their on-farm decisions. He adds that it gives them incentives for using new technologies and practices as they become available and financial recognition of on-farm carbon sequestration. He concedes that the cost impact will vary from farm to farm.

Ahie believes the HWEN recommendations enable sustainable food and fibre production for future generations, while playing a fair part in metting the country's climate commitments, and is the simplest, best system. He hopes politicials will support it.

Meanwhile, B+LNZ - which says it is supportive of the HWEN proposal - has concerns about the pricing mechanism being proposed.

Chair Andrew Morrison says it wants to be sure that what is being asked of sheep and beef farmers is "fair and equitable".

An information sheet put out by B+LNZ states that there is a need for a cautious approach in regard to pricing and says, "B+LNZ's more detailed additional modelling indicates that the He Waka Eke Noa modelling underestimated the impacts on sheep and beef farm systems' profitability and therefore the emissions reductions likely to occur at the prices modelled by the programme.

"This is because using an average farm does not reflect the significant diversity across and within our farming systems."

It further adds, "There's no doubt that emissions' pricing is confronting for many farmers and for some could significantly affect profitability. Through HWEN we're focused on minimising costs while supporting farmers to play their fair part in measuring, managing and reducing emissions".

HWEN's proposal is now in the hands of the Government, which has until the end of the year to decide whether to accept, reject or modify the recommendations.