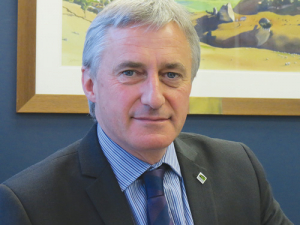 Rolleston delivered a paper to the recent 78th annual Grassland Association conference at Timaru entitled ‘Conditions for co-existence of genetic modification in a pasture-based system’.

His message is that GM and non-GM crops can peacefully co-exist if the right regulatory framework is in place, for example, avoiding cross-contamination by methods already successfully used to ensure certifiable seed purity in non-GM production.

Of interest to him is a GM ryegrass developed at AgResearch’s Grasslands facility which, due to its high metabolisable energy

(HME) system, achieves a 20% increase in photosynthesis and a 40-50% increase in production. It could provide the same liveweight gain for 16% less feed and 30% less water, while also reducing nitrate leaching and greenhouse gas emissions.

Rolleston says that when he visited AgResearch in 2015 for a presentation on the GM ryegrass, he was struck by how the farmers in the visiting group became increasingly angry at the fact this grass was “trapped in the laboratory”.

NZ’s regulatory process and likely practical restrictions mean the HME system is now being trialled in the USA in soyabean and would eventually extend to ryegrass and alfalfa.

“American farming interests are closely following these trials,” he says.

In his paper, Rolleston noted that the USA is both the largest user of agricultural GM in the world and produces the largest quantity of organic food. However, organic production uses about 1-2% of agricultural land while 90-95% of farmers raise GM-approved crops.

“In addition, NZ’s GM-free (i.e. tested GM-free) corn seed also comes from the US, suggesting that co-existence exists where there is a will.”

He says that in the US the “Non-GMO Project” was created to give consumers a choice to eat non-GM food, and the sector now claims to be the fastest-growing in the marketplace with at least 2800 verified brands – nearly 40,000 products and US$19.2 billion in sales.

“The regulation we have now is not fit for purpose. Politicians have to stand up and be brave about this and actually have the conversation.”

Rolleston’s paper considered various scenarios under which GM crops and forages could co-exist on neighbouring properties, such as buffer zones, grazing or harvesting before flowering, and agreements between neighbours to stagger planting and flowering of similar crops.

For wind pollinated plants, for example, it was important to consider not just the spread of pollen but “gene flow,” which depended on pollen viability, receptive flowers, fertilisation and seed development.

He says gene flow studies have been done on wind-pollinated forage grasses such as ryegrass and tall fescue, including at AgResearch.

Pollen has been detected up to 1km from such crops but gene flow was limited to 30-50m for ryegrass and 150m for tall fescue.

High Country farmers are questioning the Government’s motives and the legality of its proposed reforms to pastoral land legislation.

The NSW Government has announced that a moratorium on genetically modified (GM) food crops will be lifted in the state from 1 July 2021, ending an 18-year ban.

A new study has found a strong ‘can do’ attitude and cooperative spirit in the agricultural sector were significant factors in minimising losses and uncertainties during the Covid restrictions last year.

Editorial: Credit is due

OPINION: It's official! New Zealand dairy farmers have the world’s lowest carbon footprint – at nearly half the emissions of other international producers.