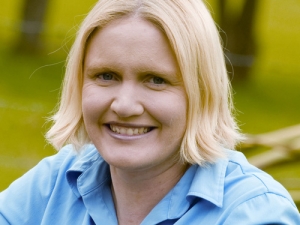 Fat is back for lambs: we may have gone too far towards leaness, claims a senior scientist with AgResearch's animal genomics team, Tricia Johnson.

And intramuscular fat (marbling) in lamb is a key to the higher quality products the New Zealand industry is seeking, she says.

Johnson told a recent Beef + Lamb NZ mini conference in Tuakau about "the rise of fat". Research is underway by BLNZ Genetics and Alliance Group.

"A 1970s Southdown was fat in all the wrong places; now the question decades later is 'have we gone too far in selection towards lack of fat?' " she says.

Data generated from meatworks' measurements of 1000 lambs showed that in the 18kg carcase range more of the animals were almost under-fat – almost too lean compared to those over-fat.

Johnson has seen other data indicating we are going too low in fat. Increasing numbers of carcases are described by the meat industry as 'blueback carcases'.

"We have actually started to take so much fat off these animals that we are getting some lambs coming through devoid of fat," she explains.

NZ needs to be known for producing a high quality, consistent product. "We need an optimum lean-to-fat ratio; we need it to be visually appealing and a good consistent eating experience."

For consumers this involves texture, aroma, flavour and juiciness.

"The reality is that fat has a key role to play in all these attributes. The amount of fat and lean in lambs is fixed at the time of trucking," Johnson says.

"Genetics has played an instrumental role in changing the shape and constitution of animals. A lot of pressure has gone on selection for increased lean growth rate and there tended to be a penalty against fat in both maternal and terminal sire breeding programmes over the decades."

However, Johnson believes we have now realised that we are overstepping the mark -- we have gone too far and reached an optimum.

"We can't go to those exceptionally lean animals," she says. "Some subcutaneous fat is needed; bluebacks are not wanted, but neither do consumers want a great hunk of fat."

The NZ meat industry’s challenges in the UK have increased with UK retailer Waitrose planning to source all lamb from only British producers.

Farming for more and better lambs

Cold spring weather is keeping a lid on pasture and lamb growth rates, so early weaning some lamb crop may be a good option.