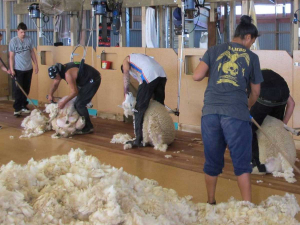 Federated Farmers says there could soon be an animal welfare issue as sheep farmers ask the government to allow overseas shearers into New Zealand.

The New Zealand Shearing Contractors Association had initially applied for 200 shearers to fill gaps in the local workforce, but that has been scaled back to 60. Even this reduced number will shear 90,000 to 100,000 sheep a week, but still is a long way short of the work required.

Federated Farmers immigration spokesperson Chris Lewis says it has been reminding the government since late winter about “the increasing urgency around the need for shearers this summer”.

"Shearing largely plays an animal welfare role for the common strong wool breeds. A capable shearing workforce is needed to avoid issues such as fly strike and animals suffering in the summer heat.

"It is important to all New Zealanders the government considers animal welfare, as well as human welfare, in its border control decision-making. Farmers need this shearing capacity to ensure the welfare of their animals," William says.

Without experienced international shearers New Zealand does not have the workforce here to cover the peak summer shearing period. Shearing delays will not mean farmers just have to wait their turn, it means that animals may suffer, an outcome no one in New Zealand wants to see, says Beetham.

The required international staff have all been identified and are ready to go, they just need the green light from government.

However, even if they are approved for entry, there are now issues with capacity in quarantine.

In a world where a vast range of everyday items are made of injection-moulded plastic, Christchurch inventor Logan Williams wants to put New Zealand wool in "pretty much everything".