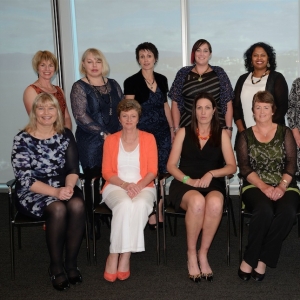 A few of the graduates from this year's intake.

FOURTEEN WOMEN completed the Agri-Women's Development Trust's (AWDT) Escalator programme last week, bringing its total number of graduates to 53 since it began in 2010.

The 10-month programme came about after AWDT's research into the role of New Zealand women in agriculture found low participation rates at leadership and governance levels. In an effort to answer this problem, the programme aims to develop women's skills and confidence to govern and lead agricultural organisations and communities.

This year's programme attracted women from Bay of Plenty to Southland who are involved in the dairy, honey, sheep and beef, animal health, agri-business and banking sectors.

"Escalator continues to attract women from across the agricultural spectrum – from grassroots farmers who are heavily involved in their businesses and communities to women in corporate roles," says AWDT executive director Lindy Nelson.

"This kind of mix has high value through knowledge exchange and widening of very diverse networks, then later on through involvement with a very strong alumni group."

At a ceremony held in Wellington, the 2014 graduates were joined by more than 100 industry leaders, including 17 members of the Escalator Alumni who travelled from throughout New Zealand and Melbourne to further their own leadership development and support the graduates.

Seven members of the alumni, including two from this year, are now assisting the AWDT develop and deliver its programmes around New Zealand.

"It's exciting to see one of our original goals -developing women to train and support other women – now being achieved," says Nelson.

The man behind New Zealand’s newest agricultural training venture is a local farmer and entrepreneur – with a proven track record in the sector.

The Winchmore Research Station, Mid-Canterbury is coming back to life once again in the world of agricultural education.

Farmers understand they must work with the Government to improve the environment, says a noted Massey University scholar.