Ag contractors face up to challenges 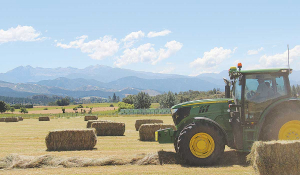 Rural contractors around the country tackling a number of weather and labour issues.

New Zealand's rural contractors are facing a mixed bag of weather conditions, from drought in Northland to a cracker season in Southland.

The Rural Contractors NZ board met recently and members reported they and their farmer clients are dealing with a very diverse range of climatic conditions.

Waikato-based Helen Slattery represents Zone 1, which extends to Northland from northern Taranaki and northern Hawkes Bay. She says Northland was in near drought conditions and while the Waikato was dry, the conditions were perfect for maize. The grass harvest for the season had also been good with a lot more hay made than last year. This had meant Waikato farmers hadn’t needed to buy in feed though this was now starting to change.

Wairarapa-based Clinton Carroll told the RCNZ Board that things had been similar in his area.

While it had been a good season in the end, he’d found it the toughest ever after a cold, wet start.  Barley harvesting was just starting, with some above average yields reported. Grass growth had been good but conditions were now beginning to dry out.

Canterbury member Martin Bruce says it’s still relatively green compared to other seasons and cereal and maize crops were also doing well. The harvest was in full swing. Staffing remained an issue with many rural contractors forced to hire people from other industries who often had no real idea about the work involved.

Wanaka-based Richard Woodhead says Otago had experienced all sorts of weather from drought conditions on the eastern coast to snow to torrential rain annihilating cherry crops. “There’s lots of sad stories there.” Crops had also been affected with one recent harvest of rye corn recording 0.6 tonne per hectare rather than the usual 3-4 tonnes.

RCNZ president David Kean, who is based near Winton, said Southland had been experiencing a “cracker season” after 200m of rain in January.

“The crops are jumping out of the ground. Everyone’s got enough work.”

The downside was finding skilled workers.

Kean says Agriculture Minister Damien O’Connor had encouraged rural contractors to hire more Kiwis and the industry had responded. However, while some recruits were good, others simply did not have the necessary skills. As a result, insurance claims were on the rise for damaged machinery.

Kean says some managers were at their wits’ end dealing with issues – such as men in their 60s or even 70s who’d perhaps had skills in their day to drive tractors but found dealing with today’s hi-tech machines a real challenge.

He says some rural contracting managers had left their jobs because of the “horrible pressures” created by having to deal with issues arising after leaving people working alone operating machinery in paddocks.

Rural contractors in Southland say the wettest spring in 30 years is impacting on already short supplies of feed.

Andrew Olsen has been appointed as the new chief executive of Rural Contractors New Zealand (RCNZ).