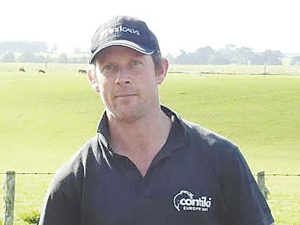 If you’re selling or leasing bulls this spring, understand the risks and know the animal’s history of movements and health, says Manawatu beef farmer Richard Morrison.

Bulls tend to be moved around a lot, so it is essential all their movements are recorded and confirmed by the sender and receiver in the NAIT online system, within 48 hours of the bull relocating.

All moving animals must go with a completed animal status declaration form (ASD). This is necessary for evaluating the bull’s TB status and movement history.

“Know your customers too, their NAIT number and their onfarm biosecurity,” said Morrison.

Richard and his brother William host spring bull auctions on their property, selling about 250 Hereford bulls to customers from around New Zealand.

They assign stock agents as their PICA delegates who ensure all NAIT transactions are recorded from their property and at the bull’s new location, even if it is only for a couple of months.

Their 1430 ha Marton property is two beef and sheep farms. They chose to register both farms as one NAIT location as permitted, being within a 10km radius of one another.

“We are aware this decision exposes both businesses to more neighbouring properties with bigger boundaries to manage, but that’s a risk we’re willing to accept and mitigate,” Morrison said.

Morrison does not doubt the importance of livestock traceability.

“It comes with the territory. You’re always wary of minimising disease risks particularly in this current climate of Mycoplasma bovis. When sending bulls out, you want to avoid multiplying a potential issue.

“We’ve had good clients and friends asking to temporarily lease a bull. But we aren’t willing to act ad hoc and expose ourselves to risk, creating dire implications for everyone.”

Morrison believes farmers could do more when managing bull movements, with the uncertainty over bulls being sourced from multiple locations and stock agents.

Beef farmers sending service bulls to dairy farms for mating must always record the movements in the NAIT system. And the dairy farmers are responsible for confirming the movement in their NAIT accounts, even if they use an information provider such as Minda in the first instance.

The dairy farmer then becomes the PICA farmer for the service bull and must record future movements off their property in NAIT, to ensure effective traceability and disease management.

“There’s a big overlap with beef and dairy farmers when leasing heifer grazers or bulls for mating,” he said.

Still, the importance of good biosecurity practices onfarm is resonating with most farmers and key to that is an effective animal tracing system.

“I don’t think farmers have appreciated NAIT until now,” Morrison said. “We can see the benefits after the Mycoplasma bovis outbreak.

“As food producers and sellers, it is in our interests to support NAIT and improve the accuracy of information held in the system.”

He says it provides a platform to leverage and pitch our products overseas and to the top end of the market.

“There’s the provenance aspect too, our story, unique to NZ. We can’t claim to have these values without a traceability system like NAIT.”

Marlborough deer farmer Justin Stevens has the records of all his deer dating back to 2016.

Better communication between dairy and beef farmers can strengthen animal traceability and disease management, claims a Bay of Plenty farmer.