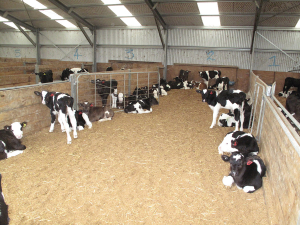 Calves should be given a single treatment at four days old and the product's approved for use on organic farms.

Antibiotic resistance is an ever-increasing problem, according to the World Health Organization. It occurs when micro-organisms change after exposure to antibiotics, becoming "superbugs" that no longer respond to traditional treatments. This can result in prolonged illness, disability and death in animals and people.

Antimicrobial resistance occurs naturally over time, usually through genetic changes. However, the misuse and overuse of antibiotics is accelerating this process.

Agilis Vet Ltd is distributing Amplimune in New Zealand. It is a New Zealand veterinarian-owned company, supplying and marketing animal health products to veterinary clinics throughout New Zealand. Amplimune, a prescription-only product sold in the United States and Canada, was approved for sale by ACVM registration last September.

The product should be given to calves in a single treatment at four days old and it's approved for use on organic farms, where antibiotics are forbidden.

"We're introducing more preventative drugs, trying to keep the cows healthy so you don't have to use antibiotics or other treatments," Agilis general manager Ben Lee says.

"That's a win for the farmer because a healthy animal is nicer to manage, it's nicer for the animal and it's more profitable. As an example, if we can avoid an animal having mastitis then we don't get the losses associated with mastitis."

Lee says if farmers want to farm more naturally, they can look at products which are organically registered.

"And one of the good things we're finding with all the biologicals is that they don't leave any residue in the meat or the milk, so animals can be slaughtered or milk straight after usage."

Lee reckons Agilis is finding a strong pastoral niche in New Zealand, where farming is mostly based around seasonal production.

"We follow the grass growth so all our calves are born in six weeks, whereas on an American farm they're born over 52 weeks because it's year-round production," he explains. "In New Zealand we might have 100 calves together, where disease can spread. Because our animals are outside, with less biosecurity, there's a greater need to have strong immunity in our animals."

Lee says he immune-stimulants distributed by Agilis are complementary to other products, such as vaccines for particular diseases.

"An animal can still get sick and will still need antibiotics and drenches and the like. A calf has no immune system when it's born - so it needs to get gold colostrum from its mother to develop that immune system over the next few weeks," he explains.

"This is not a silver bullet, but it supports that calf immune system."

He adds that every calf in the country would have a naturally-strong immune system if it was fed the best colostrum available, but animal immune systems also weaken under stress, just like in people. "And it's those occasions when you need to augment your immune system."

Lee says Amplimune reduces the clinical signs and mortality associated with E. coli K99 diarrhea in neonatal calves. The product is an emulsion of mycobacterium cell wall fractions (MCWF) that enhances innate immunity to fight bacterial infections without the use of antibiotics.

The Government has approved Amplimune for intravenous administration with zero days' withdrawal for slaughter.

Amplimune is a potent immunomodulator that is an emulsion of mycobacterium cell wall fractions (MCWF).

When injected into the animal, it enhances both innate and adaptive immune responses to fight bacterial infections without the use of antibiotics.

The product has previously received regulatory approval in the U.S.A., Canada, and the United Arab Emirates. Amplimune is OMRI listed in the U.S.A. and Canada for use in organic production.

Antibiotic resistance occurs when micro-organisms change after exposure to antibiotics, becoming "superbugs" that no longer respond to traditional treatments. This can result in prolonged illness, disability, and death. Antimicrobial resistance occurs naturally over time, usually through genetic changes. However, the misuse and overuse of antibiotics (in both animals and people) is accelerating this process.

Antimicrobial resistance (AMR) is the buzzword in the animal health sector. In a series of articles, microbiologists Greg Cook and Adam Heikal explain AMR and look at how the agriculture sector should respond.