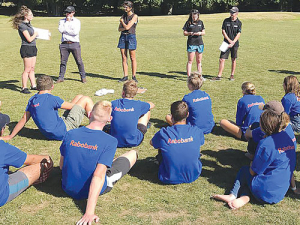 An agri-leadership course held recently had secondary students ‘buzzing’ about career opportunities in agriculture — even though many already came from farms.

Completely different perspectives on the sector were given at the Rabobank Waikato Agri-leadership Programme, says coordinator Celine Walters a Waikato University agribusiness student.

She says a presentation by KMPG’s Julia Jones on the future of food was an eye-opener for the 22 Year 11 and 12 students from the Waikato region.

“There are many different things you don’t know are happening out there like marijuana olive oil that she was talking about,” Walters told Rural News three days into the four-day course.

“Talking about alternative meat and milk sources it was incredible looking at where New Zealand is actually going to sit in the future. It is such a revolutionary time for agriculture worldwide.

“I think it sparked an interest [in primary sector careers] because they could see there will be jobs in a couple of years that don’t exist right now which is exciting for them.

“There is so much potential for them; they have realised that from talks like that.”

Walters also hopes the programme has opened their eyes to the variety of jobs.  “We have gone to Silver Fern Farms, DairyNZ, LIC, Fonterra and Zealong [tea]. At all those organisations they have talked about the different opportunities within those areas – from research to science to farm work and even law.”

She says the companies and organisations made a big effort to connect with the students.

“Whenever I say the visit is for high school students they alter the programme to show them opportunities and also what they actually do. So there is always an interactive component.”

Although all but about five students were from farming backgrounds many learnt new aspects of what happens after the farmgate.

“If you are from dairy what happens to the produce after you’ve milked the cows? And who else is behind the scenes they didn’t really know about before?” Walters adds.

More leadership components were added this year to the course, says Walters, who was also involved in organising the course last year. The 2019 programme is the fourth time the event has run following the inaugural event held in 2016.

“This year we had a leadership coach from Rabobank come along to one of our talks and Nicole Rogers, a Paralympian who spoke about all she had gone through in life because she lost a hand in a mowing accident when she was five.”

Walters says that how Rogers has overcome her battles and how she got to be a Paralympian, was quite a different perspective for the programme.

“When she left everyone was buzzing about such an inspirational story. “

She says great feedback about the course has been received from the students.

“Obviously not everybody is going to like every company. But there is always something they say was ‘really amazing’ or coming to me after and saying ‘I really liked this’.”

The programme is an initiative of the Rabobank Waikato Client Council, a group of leading Rabobank clients who meet regularly to identify and discuss the challenges facing the agricultural sector and to develop activities that contribute to a sustainable food and agribusiness industry for future generations.