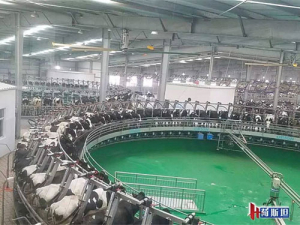 Two 80-BAIL Waikato Milking Systems (WMS) rotary platforms are at the heart of a new 10,000 cow dairy farm in China.

The 400ha farm in Huaxian, in Shaanxi province northwest of Shanghai, is owned by the big dairy processor Bright Dairies. Its animal welfare and processing standards are said to be among the world’s most stringent.

Just back from visiting the new facility, WMS’s country manager China, David Morris, says the installation is one of several it has built on Bright Dairies’ farms.

“Bright Dairies was formed in 1911 and is today among the largest milk processors in China; its farms provide milk for a broad range of fresh milk, yoghurt and dairy products for the domestic market.

“Trust is big in China and you earn that by delivering what you promise. We put huge effort into building and sustaining relationships built on trust and brand integrity.

“The innovation and manufacturing standards of our products and the depth of our customer service complement the standards Bright Dairies applies to every aspect of its farm operations,” Morris says.

Dairying in China has evolved in response to environmental challenges, and the standards new conversions must meet are among the most stringent in the world – tougher than in New Zealand, says Morris.

All animals intensively farmed are housed year-round in US-style barns where they are fed alfalfa, silage and corn, some of it grown on the farm but mostly imported from the US and Australia.

“About 75% of feed is brought to the farm – 60% coming from the USA – and thousands of tonnes of hay are imported from Australia each year.”

The cow barns have no walls and a flat roof; optimum temperatures prevail year-round.

“Dairying land is leased from the Chinese government; getting consent to convert to dairying is via an extensive regulatory process applying to animal welfare, preservation of the environment, biosecurity, etc.”

The new installation at the Huaxian Bright Ecological Demonstration Dairy Farm is the latest WMS rotary platform in China.

The two concrete Orbit rotary platforms, commissioned in October 2016, now milk 3000 cows three times daily, 365 days a year. As the infrastructure builds and matures, the herd size will increase to a maximum of 10,000 cows.

Cow are milked 20 hours a day and the plant is cleaned during the other four hours. By law, Chinese dairy plants must be washed every six hours and the dairy is set up so the platforms continue to rotate during washing.

The new dairy has milk metering and each cow is fitted with a pedometer that provides milk yield and activity data fed to herd management software. The system also has automatic sorting and weighing.

Morris says all milk produced in China must be able to be traced back to the farm and the animal.