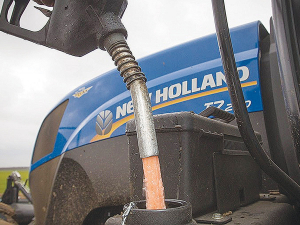 In the UK, red diesel is the term used for gas oil that is intended for use by farmers and contractors.

Some contractors in the east of the country have been advised of a three to four week delay in getting deliveries. One operator with four large tractors reports: "It's a busy time on farms, with lots going on, including spraying, cultivations, drilling and hedge-cutting. We certainly don't have enough fuel to last until the end of the month, given that when cultivating, even medium horsepower tractors are easily using up to 100 litres plus each day."

The National Association of Agricultural Contractors said it is aware of issues with deliveries in some areas and is telling its members to plan well ahead.

Meanwhile, there are reports that some farmers have been using red diesel off-farm out of necessity because of poor rural supplies of "standard" diesel. Government department DEFRA is warning users that there is no amnesty on its use in non-agricultural vehicles, so getting caught could result in a large fine, plus a calculation of the duty being evaded.

The UK's largest rural insurere, NFU Mutual is warning of increasing reports of fuel theft from rural properties, urging farmers to be vigilant and to strengthen security.

It advises fitting a fuel tank alarm such as remote electronic fuel-level gauges that can set off an audible or monitored alarm if the fuel level in the tank suddenly drops or falls below a defined level. It also suggests that tractors and powered machinery should also be locked up and out of sight from public roads and footpaths when not in use, to prevent thieves draining fuel tanks.

In the UK, red diesel is the term used for gas oil that is intended for use by farmers and contractors, alongside other off-road vehicle users.

It is so named because since 1961 it has been a requirement that it must be marked with a red dye as well as chemical markers to make it easily identifiable.

This helps prevent its misuse in road vehicles as it is a lower cost and is subject to a reduced VAT (tax rate) of only 5%.