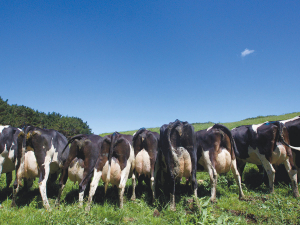 The national herd is a good representation of its legacy: small cows which produce, on average, 380kgMS.

Times and demands have changed however: now farmers are faced with radical change because to maintain viability while protecting the environment they need to reduce the size of their herds and maintain or improve profitability. And that requires a new approach: fertile cows which consistently produce more than 550kgMS over a longtime.

The New Zealand Animal Evaluation Unit recently conducted a weightings change to the BW index which saw kg of fat increase – favourably impacting Jerseys and some crossbred cows with a consequent increase in Jersey and crossbred sire rankings.

Turning the tide in favour of Jerseys was welcomed by farmers who flooded social media with endorsing comments. It’s good to see the breed come back into the spotlight as it’s been the foundation of many highly productive Kiwi herds.

But that breed endorsement was drowned out by a clamour of confusion from farmers who, in the main, say BW doesn’t necessarily mean a profitable cow.

We all know farmers who will point out their top cows: sometimes they have high BW but more often than not they don’t.  Often they have low BWs because they are the offspring of an overseas sire or dam which doesn’t have a NZ ranking.

It’s a dilemma AEU has grappled with – how to provide a fair ranking which accurately guides farmers on which sires to use and which cows to bring into the herd.

The changing dynamic of dairy farming is, however, increasing the ‘weighting’ on providing farmers with information which helps them transition from high numbers of low or moderately producing cows to fewer highly fertile, productive animals which last in the herd.

We need to consider how quickly a farmer receives a return on his or her investment in a cow.

I frequently talk with farmers who rear high BW heifers only to find that when they enter the herd they are weak and have poor udders and have to be culled within the first lactation; many more last no more than two lactations.

Farmers – and the country – can’t afford that wastage. Farmers need moderately sized, robust animals bred to produce and last in the herd from day one.

Over the past few decades, focus has been on numbers but nitrate leaching and increased environmental awareness is sending a very strong message that the tide is turning with the focus turning from numbers, to productive life.

The absence of an evaluation tool which suits all farmers is seeing a shift to a growing appreciation that it’s what’s in the vat (and the back pocket) that counts.

Your future is in their genes

If you are a dairy farmer, the prosperity of your future lies in your heifers - the future of your herd.

The figures tell the story

The challenge for Kiwi farmers to reduce herd size while maintaining or building production is generating an increase in demand for overseas genetics, says World Wide Sires.